The mere process of writing this bug report blog post has helped me run down different troubleshooting options. It's become a personal sanity check ensuring I've carefully reviewed alternatives before claiming, "it's not working."

Title
Two iPhone backups (iTunes and iCloud), from the same device, are missing.

Steps
1. I backed up my iPhone via iCloud and iTunes.

2. I restored my iTunes backup to a replacement iPhone.

3. After completing the restore, I noticed discrepancies on my iPhone (detailed below). I decided to try the restore again, but both backups were missing.

Expectations
I expected, after getting a replacement iPhone, that both my iTunes and iCloud backups would be available to restore from. When I look at my iCloud account (on my iPad), I see two iPhone backups, yet they're both inaccessible from my iPhone.

On Monday, I took my iPhone 5 to the Apple Genius Bar because it would kernel panic almost daily. The Apple Genius diagnosed it as defective hardware (bug_type 110 - CRC error).  He ordered a replacement iPhone 5 for me since it's covered under my AppleCare warranty. It arrived yesterday.

I backed up my defective iPhone via iTunes before going to the Apple Store to pick up the replacement iPhone. To be on the safe side, I also backed it up to my iCloud account.

When the restore was complete I noticed a serious discrepancy. iTunes reported 4.65 GB free on the iPhone, but my newly restored iPhone 5 self-reported 16.4 GB free. 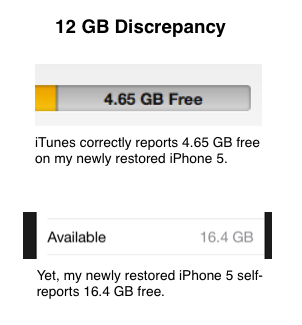 At this point I thought I had two options. First, I could try resetting and erasing my iPhone and restoring it from my iCloud account. After all, my most recent backups to iCloud and iTunes were only a few hours old. But, for some reason, iCloud reported "Last Backup: Never" on my newly restored iPhone.

My second option was to restore from my iTunes backup since my iCloud backup wasn't available. I tried to access my iTunes backup on my MacBook Air but that's gone missing too. iTunes reports: "Your iPhone has never been backed up to this computer."

I thought that was a mistake, so I checked my MacBook Air's hard drive under "~/Library/Application Support." Guess what? The iPhone backup that I just restored from is really missing from my hard drive. It's as if I restored the iPhone from the backup and then it self-destructed.

Another odd thing is my newly restored iPhone reports 0 songs. Ok, that may be possible since I subscribe to iTunes Match and my music may all be sitting in iCloud. While that could be part of the discrepancy, it doesn't explain why iTunes reports that the iPhone has several hundred songs on it.

Has double redundancy failed me? I'm getting a bad feeling that my iTunes restore may have corrupted my iPhone's file system and I've run out of iPhone backups.

Perhaps it's my own fault for not following the 3–2–1 rule of backups:
3 backups
2 media
1 off-site

I've had my issues with backups. I only icloud sync contacts and manually drag and drop photos and videos.
With 300+ apps, this helps clean up the interface.