I've worked on Windows computers much longer than I've worked on Macs. As a software engineer, I've realized a couple key issues with Windows.

Windows Registry
This is a single point failure on Windows. The registry database is used to store the settings and options for Windows' users, applications, preferences, and hardware. When Windows boots up, it reads this database of settings. If the registry gets corrupted, it can render Windows unbootable. When applications install and uninstall themselves they update the registry. When a program fails to uninstall correctly, it can leave cruft in the registry which can lead to performance and stability problems. This is why Windows computers really do slow down, over time, as you install and uninstall more and more applications.

How does Mac OS X get by without a registry? Simple, each application has preferences which are stored in preferences folders. For user specific preferences, the folder is stored under the user's home folder. For system wide preferences, the folder is stored in a globally accessible location. The preferences data is a human readable file (called a plist which is short for property list), which can be edited by hand - but manually editing a plist is rare. The plist file is only read when needed - unlike the Windows Registry, which must fully load to complete the boot up process. If the plist file becomes corrupted it can usually just be deleted and the respective application will create a new one the next time it loads.

Networking
On the desktop computer there are basically two operating systems: Windows and Unix.

In the world of high-tech, new usually means better, but that's not the case when it comes to security. MS-DOS got its start on PCs in the early 1980s when there was no local area network and there was no need to log into a PC. Unix, on the other hand, ran on mainframe computers which were accessible by multiple users at once. So, from the beginning, unix had the concept of users, permissions, and security.

Retrofitting security into Windows has been its biggest Achilles' heel. Of course, with more than 90% of the desktop market share it's also a big target.

I joke that Windows is an "open system" in that all of its ports and services were left wide open for attacks.
Posted by Joe Moreno at 7:46 PM 1 comments

Design
That's the single word that best describes Apple. Not just industrial design, but UI design, software architecture design, design through layers of abstraction. The product of this is elegance and simplicity.

Marketing
It's about the marketing. Microsoft is, first and foremost, a marketing company. Although they lose when it comes to innovation, they clearly win when it comes to marketing and, obviously, money. Simply put, you cannot gain 90+% of the desktop market share without being the marketing king.
Posted by Joe Moreno at 7:38 PM 0 comments

No, not really.
Direct comparison of the two companies' business models is - pardon the pun - like comparing apples to oranges. Seriously, Apple is a hardware company, like Dell or HP, and Microsoft is a software company. Just to be clear, hardware companies make their money selling hardware and vice versa. Not to mention, changing business models of this magnitude is not simple. (IBM, who successfully did this in the mid 1990s after a near death experience, is the rare exception.)

Apple appears to be the personal computer company that's been around the longest. Although a big chunk of Apple's revenue comes from the iPod how many other multi-billion dollar computer companies, after 30 years, are still selling what they sold on day one?

As an Apple shareholder, I much prefer comparing Apple, with its $78B market cap, to Dell, with it's $61B market cap. 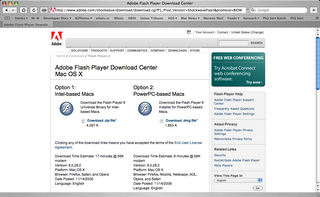 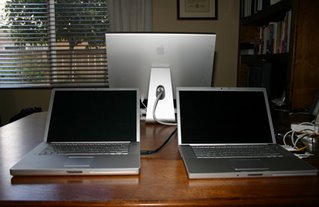 Disclaimer: I’ve worked for Apple for eight years. Not only had I never used a Mac before coming to Apple, but for my first three and a half years at the company I only worked on Windows NT and Windows 2000 on a daily basis.