The Art of Coding at Any Age

Yesterday, Dave Winer shared a New York Times interview with Billy Joel where the Piano Man said, "I thought there was a mandatory retirement age at 40, but then the Stones broke that barrier."

Dave was born the same year as Steve Jobs, Bill Gates, and Yo-Yo Ma. That means Dave is well past 40 years old which was thought to be the age when computer programmers (coders) were brought out back and shot. For most programmers, a successful career in Corporate America means up or out. You start off as a software engineer, then you become a tech lead followed by forgoing coding to manage direct reports.

People like Dave and I, who enjoy the trenches of coding past 40, are not the norm. A 30 year old software engineer looks upon a fellow programmer, 20 years senior, as out of touch. (Except, in rare circumstances, when they're looked upon as one of the greats who works close to the kernel meaning that they really know what they're doing.)

While Dave has successfully created and sold businesses, his first love is programing. A couple days ago Dave made a point that if he were a visual artist or musician then no one would bat an eye at the fact that he's closing in on 60 while still coding every day. No one asks, "Why is Yo-Yo Ma still playing the cello? Why hasn't he moved on to conducting?"

Elegant Code
Dave also asks, "Why can't people see that this [coding] is an art?" That's a very good question and I love Hugh MacLeod's comment, "Art’s purpose is to express consciousness." While software usually serves a process purpose, we still write it much like we'd write most anything else in a text editor such as a novel. But is it fair to consider it a form of art?

What is the purpose of art? To create. To inspire. To express one’s self. To make one aware of one's surroundings. To make life better, etc. There's no simple definition. To me, holding most any modern Apple product feels like holding art, albeit a highly functional piece of commercial art.

The problem with code, as a form of art, is that people don't see what was created, rather they only see what it does – its function. Code has function. Art has design. Code is a means to an end application. Fine art focuses more on aesthetics than utility. I cannot think of a form of art where the work created is not what's seen which is different from a computer program that gets translated into machine code. Consumers of code only see the interface, not the implementation. Again, this seems very different than, say, a movie since the general public critiques and studies the film, not how it was made.

Art is displayed or performed. Where would people observe code? In its raw form or its final application form? One could argue that an Apple Store is a museum for displaying products of art like a gallery, but the challenge with code as an art is it doesn't exist without a medium. While that's technically true of, say, a poem, I can still hold O Captain! My Captain in my hands in its final form.

The creative process of programming is definitely more art than skill, much like writing a story, suitable for someone to do at any age. Perhaps the ageism in high tech is due to the ever changing technology as more senior programmers stick with older, more comfortable, systems? But, in software engineering, like rock and roll, perceptions will change regarding age.

Chances are, though, if you're still coding on a daily basis, into your 50s, using current technologies, then you're undoubtedly very, very good. To Dave, I ask, "Who else, past 50, codes like you?" Maybe it's time for a Museum of Computer Programming with Ada Lovelace and Grace Hopper inducted into the hall of fame.
Posted by Joe Moreno at 3:48 PM 0 comments

Yesterday, I drove over the Golden Gate Bridge and discovered a small chink in its armor. 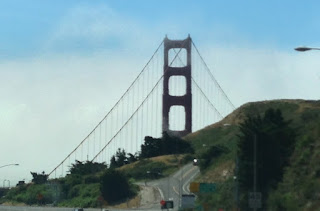 As I approached the southbound tollbooth I noticed that there were no cash payment lanes and my rental car wasn't equipped with a FasTrak transponder. After driving through the tollbooth, I wondered if the car rental company would receive my bill for the delinquent toll and then tack on a $20 administration fee. 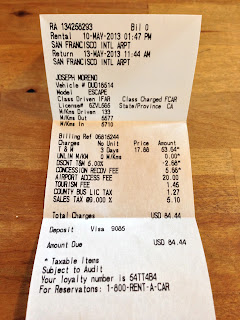 The rental car rep at the San Francisco Airport explained that the new toll system required me to pay the toll on the FasTrak website using the license plate number of my rental car. If I paid within 48 hours the toll bill wouldn't be sent out. It turns out there's a key flaw in this system since I couldn't pay for a specific trip over the bridge. On the website, when I entered my credit card info and selected an effective date, I'd have to agree to pay for 30 days worth of trips.

I called the FasTrak customer support number and they could only narrow my payment down to yesterday and today, not a specific trip or amount, which means I may end up paying for other people's trips across the bridge in the car that I rented. The rental car service rep told me that 800 cars were reserved on the day that I picked up my vehicle so it's reasonably possible I may end up paying for more than my share. We shall see.