Puppy Leadership is where we all start when we first have direct reports in our charge. When we were new people managers we were overly excited like a young puppy. The key is to learn quickly from your leadership mistakes. Since leaving the military, I've taken for granted the experiences I had. Unfortunately, in Corporate America, I'm too frequently reminded that not everyone has had the same opportunities I had in my 20s to lead many dozens of direct reports. Specifically, I'm referring to being a calm, thoughtful, and, most importantly, an outwardly focused leader.

Several times, I have been a manager's first direct report. This has been especially painful for me when my new manager has spent more than a decade as a career individual contributor. Individual contributors are the people in the trenches. They're the ones doing the real work such as software engineers, copywriters, graphic artists, sales account managers, etc. Individual contributors are knowledge workers who need quiet working conditions to create and get things done. Individual contributors need to focus inward, on their work, which is great for what they do. However, in my experience, it becomes a problem when a long time individual contributor moves up into people management without proper training. Proper training starts with the dos and don'ts of good leadership practices. Leaders set the example, more so by their actions than their words. My list of dos and don'ts focuses more on the don'ts, as in don't do this or don't do that. Over the years, I've complied this list of bad leadership practices I've experienced and I've made some of these mistakes, myself. There are many more traits of a bad leader that you can add to this list, in the comments section. In the mean time, read and learn quickly, young grasshopper. Do not make the same mistake twice.

A poor leader will frequently...

0. Not supervise, which is the most important leadership step.

1. Tell a direct report to do something urgent, and then interrupt with either other tasks or asking for unnecessary status updates that impede progress.

2. Micromange, meaning they will tell a direct report how to do their job. Save the how for training sessions and don't confuse supervision with micromanagement.

3. Not inspect subordinate's work before passing it along and then blame the subordinate when their work is rejected. A leader must inspect what they expect.

4. Send an e-mail on a non-pressing issue and then immediately followup with an interruptive text or phone call asking, "Did you receive my e-mail?" Equally annoying is sending multiple messages as a stream of consciousness instead of taking a minute or two to think things through.

5. Fail to keep track of both their own tasks and of the tasks they've delegated. Since they're not tracking delegated tasks, they can't effectively supervise to ensure that tasks are completed.

6. Dump tasks on subordinates, instead of delegating. The poor leader will task subordinates when items pop into their head, regardless if it's in the hallway, lunch room, or at the bar over a beer. Set your subordinates up for success by delegating to them when they're best poised to receive and write down your tasks.

7. Fail to clearly define and prioritize tasks they've delegated with deadlines. It's best to get confirmation from a subordinate that a deadline is reasonable.

8. Make busy work when stressed and mistaken activity for progress.

9. Go first when leading a staff meeting. When a leader runs a staff meeting, they should hear from all of their subordinates before delegating tasks since the work of a staff member may already address an issue.

10. Show up first to eat free food at a corporate event and do very little to contribute to the event.

11. Think a subordinate's on-call, day and night, to be tasked at any moment, regardless of a task's urgency. A poor leader does this because they're afraid of forgetting the task and they want to get it off their plate.

12. Explain the same thing repeatedly, over and over again, frequently, time and time again; both in e-mail and when speaking. It's redundant and wastes people's time, needlessly. (Yes, there is an intentional redundant pun in this item.)

13. Make a plan. Tell it to you. Then change the plan for a non-obvious, trivia reason and not relay the changes.

14. Interrupts productivity by calling for meetings at the last minute, with little notice and no agenda.

15. Delegate tasks while borrowing a senior manager’s authority (Damn XO), then they fail to see why their own tasks aren’t carried out by direct reports.

16. Speak negatively about others, behind their back, rather than addressing the problem with a real solution.

17. Increase assignments without adjusting timelines. Something's "gotta give," either the deadline or the work quality. You can have it good, fast, or cheap. Pick only two.

The bottom line for all leaders is: Do you inspire people to go out of their way for you? If you don't then adjust your leadership style before assuming it's due to poor subordinate performance. You're the leader, so lead. At the end of the day, you're responsible for everything your team does and fails to do. Don't be that overly excited puppy, bouncing off the walls and yelping at everyone. 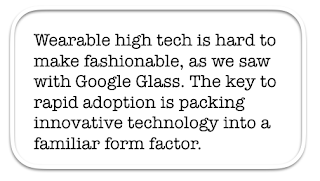 Yesterday, I gave a speaking engagement called The Apple Way. I usually give it in Cupertino to business people from China. But yesterday's group was close to 50 people, so I used another venue about 12 minutes from the Infinite Loop campus in San Jose. The core of the two hour presentation is about what makes Apple unique when it comes to design and marketing.

My plan was to fly up on Wednesday, give the talk on Thursday morning, have lunch at Apple with a buddy, and then fly home Thursday afternoon. Everything worked out, except my flight back. The weather turned bad by the time I reached the southern part of California's Central Valley and I had to divert to Meadows Airport in Bakersfield. It was cloudy and raining and I was flying a few thousand feet above the freezing level. My small plane doesn't have ice protection like the big boys. I could see ice building up on my wing after flying through the clouds, which can quickly become dangerous. As ice builds up, it changes the shape of the airfoil and compromises the wing's aerodynamic lift.

Air traffic control was very helpful in suggesting that I land at Meadows Field Airport in Bakersfield since that airport had a precision approach. A precision approach guides a pilot into an airport when the runway can't be seen until only a couple hundred feet above the ground. This is accomplished by sending out a radio beacon that keeps the plane lined up with the runway and on the proper glide slope. This was the first time I've ever diverted, overnight, and it worked out nicely.

Once I landed, I needed to find a place to stay for the night. Airbnb to the rescue with a $36 room. But the weather's still too bad, today, so it looks like I'll be spending another night in Bakersfield.

To add to the inconvenience, I left my iPhone charging cable in the presentation classroom. Also, there are no restaurants within walking distance of my Airbnb. So, it was off to Walmart for food and a cable. The walk to Walmart was nice, but it started raining while I shopped. So, I "Lyfted" back to my Airbnb.

Hopefully, I'll fly out tomorrow. It's always something. But, better safe than sorry. In the mean time, I keep watching this beautiful danger: http://adjix.com/flying.mov
Posted by Joe Moreno at 4:38 PM 0 comments