I've used AT&T Wireless service since the first iPhone was released, exactly ten years ago, yesterday. AT&T offered unlimited data and then, a couple years later, they instituted limited data plans. I stayed with AT&T since they grandfathered me in with their unlimited data plan. Even today, I still had an unlimited data plan with AT&T, but they'd throttle it at a certain point. The data would still come through, but at a much slower rate.

However, data was never a big selling point for me. The real issue for me was monthly cost. Phone companies utilize a price elasticity business model, which means they figure out how to charge the most they can to maximize their profits. If they charge too little, they leave money on the table. If they charge too much, then customers will switch to another company.


Generally, cutting edge smart phones cost $500 – $1,000 or more. To defray these costs, the wireless carriers will subsidize the price of the phone by having their customers sign a two-year wireless service contract. This works well since many people do not frequently hop from wireless carrier to wireless carrier. But I like the idea of not being committed to a single carrier. So, I typically purchase an unlocked phone. Purchasing an unlocked phone means I had no service contract commitment, plus I can insert any companies' or countries' SIM card.

About two years ago, my AT&T bill was a very ridiculous $150/month. I never used up my minutes so I dropped my plan down to a moderately ridiculous $95/month which kept creeping up until it recently hit $111/month due to inflation. That's when a couple friends told me about Cricket Wireless which is now owned by AT&T. Cricket utilizes nearly all of AT&T's cell towers meaning that I'll have the same level of coverage. But they key selling point of Cricket is that it costs way less than AT&T.

So, today, I made the switch from AT&T to Cricket. It took less than an hour for me to go to the local Cricket store and return home with my phone number and service ported.

My monthly bill dropped from $111.42, with AT&T, to $35 with Cricket. But there are some slight differences.

1. AT&T LTE down stream bandwidth clocked in at 13.4 Mbps. Cricket advertises that their LTE tops out at 8 Mbps. In practice, I'm seeing about 7.8 Mbps download with Cricket which is very respectable.

2. No more unlimited data. I now pay Cricket a total of $35/month for 4 GB of data. I looked at my AT&T bills from the past year and I was topping out at less than 3 GB of data/month.

1. Unlimited voice minutes. (I was paying AT&T $40/month for 450 minutes, with unused minutes rolling over.) Most of my talking is over WiFi since I use either FaceTime or Facebook Messenger, so voice minutes was never a big selling point for me, but I do like that I now have unlimited talk minutes.

2. Unlimited texting. (I was paying AT&T $20/month for unlimited SMS/MMS text messaging; with Cricket, that's all rolled into the $35/month plan.)

3. Cricket utilizes nearly all of AT&T's cell towers, so I should see no connectivity differences.

Today, I ended up paying about $75 to Cricket, out the door, for the $35/month plan due to one-time activation charges. Let's see where it goes from here. 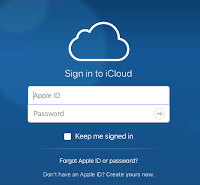 With two-factor authentication, a person needs two things to prove who they are. We experience this when we withdraw money from an ATM since we need our ATM card (first factor) plus our PIN (second factor). With a two-factor Apple ID login, I need to know both my password and I need to have my iPhone handy so I can see a verification code sent to me when I log in.

Without realizing it, we might use three-factor authentication to get into our home by entering a code to drive into an apartment complex, followed by using a key to open our front door, and finally being recognized by another family member or roommate once we enter our home.

Once I switched over to two-factor authentication, which the CSR at AppleCare walked me through, the password resets immediately ended.

This is so Easy 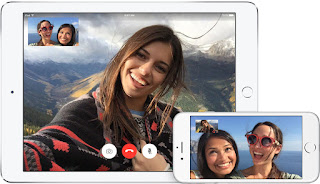 Earlier this month, my octogenarian mother had to give up her defunct decade-old MacBook that she inherited from my father. Before 2007, she had never sent or received an e-mail – so high tech is still new to her. My sister and I were a little hesitant to move her from her laptop to an iPad due to the UX change, but it's working out better than expected.

Today, she called me asking about the Epley Maneuver on YouTube. She called on a POTS line and then I switched the call over to a FaceTime video call, which she enjoyed. After I told her how to watch the YouTube video that I sent her ("Simply click the link in the e-mail, mom.") I then told her how to hang up and she enthusiastically said, "This is soooo easy." There was almost a hit of "why didn't you switch me to an iPad sooner" in her voice.

Innovation is something that reduces the cost of a transaction in terms of time or money. And that's exactly what the iPad has done for my mother.
Posted by Joe Moreno at 2:04 PM 0 comments 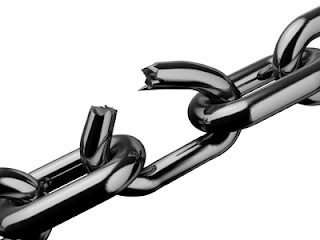 How naive we were, ten years ago, to think that URL shorteners needed to withstand the apocalypse. Even back then, we called it future-proofing. Today, clicking on a ten year old link typically yields a four-oh-four unless you're visiting the website of an Internet power-player with a keen interest in archival like the NYT or Wikipedia

While shortened links may last a decade or longer, web pages have a much shorter shelf life. As technology quickly changes, so do server-side URL naming schemes that break links. Today's working links will eventually become tomorrow's orphaned links.

I saw a fix to this problem when working at a corporate conglomerate. Every morning, someone analyzed a list of all the 404s from the past day and then did their best to fix the "referrer." Usually that was easiest done by fixing the source, if it was an internal brand webpage. If the broken link was on an important, external website then we set up a web page, where the 404 was landing, to redirect the user to the correct destination. Fix the problem at the source, and when you can't then fix the symptoms rather than shifting the blame.

Soon, it'll be common for digital anthropologists to piece together the Internet puzzle, from days long gone, to document the digital history of a culture. No different than a traditional anthropologist, except dealing with electrons instead of atoms.

The web is what it is, it is us who need to adapt our thinking to be inline with online.
Posted by Joe Moreno at 12:51 PM 0 comments

My Luck With Banking

My first thought was that I had either received $280 in cash or, perhaps, I received $180, plus a counterfeit $100 bill. I immediately spent the "Benjamin" without any problem. On Friday, I looked at my bank statement and saw that I was debited $200, as expected. I spoke to a local corner market owner who refills his store's ATM and he told me that there would be no record of the extra $100 bill since the ATMs can't distinguish between bills – everything's a $20 bill to the ATM. Reaffirmed jackpot!

I figured that I would be free-and-clear of the extra $80, but it wouldn't surprise me if, at some point in the future, that money might be debited from my bank account without notice. So, I sent a message to my bank, describing what happened and this was their response:

Dear Mr. Moreno,
Thank you for your message.  I appreciate your honesty!
As it turns out, [we] can file a dispute when you are not paid enough, but we do not have a resolution process when you are overpaid [...] it sounds as though you may have had a lucky draw!

In the mid-1980s, I withdrew some money from a Marine Corps West Federal Credit Union on Camp Pendleton. I heard some paper crunching inside the machine as the money was dispensed, jamming up the cash dispenser. When I walked into the bank to report the issue, the banker looked at me with suspicion and skepticism as I told her what happened.

"We'll look into it," she said, dismissively.

About a week later, I followed up with her and she made me whole. She seemed a little defensive when I asked what happened and how they confirmed it. She simply said the extra money was discovered jammed in the ATM cash dispenser feeder. A minor hassle for me before the age of e-mail, but it all worked out.

One day, I'll write about how, in the mid-1990s, my landlord deposited my rent checks, but he wasn't credited for them. My bank, which was a different institution than his, was adamant that he was "almost positively" lying. He wasn't, but it took a couple months to reconcile.

PS – Did you know that you can make actual size, hard copy reproductions of US bills in black and white? You can also make color reproductions of money as long as the one-sided reproduction is more than 25% smaller or 50% larger than genuine bills.