In the military, intelligence is information that can be exploited to accomplish a mission.

In the spy world, the NSA monitors signals intelligence while the CIA collects human intelligence.

In the movies, spies are people performing clandestine cloak and dagger operations.

In the Marines, part of our mission planning included a briefing from the S-2 (intelligence officer). For training missions, this briefing was usually just a real world weather report along with notional info about the simulated enemy.

Overseas, where real world intel is collected, this process can be very basic. It starts with documenting weather, roads, and attitudes regarding the climate (political, economic, social, military, etc). From there, it extends to monitoring places where attacks against the U.S. or our interests can be launched.

Monitoring North Korea's military forces may seem obvious given our heightened state of alert, lately. But, most of the time, intelligence gathering can be routine and almost passively collected. Trust me, it's not a James Bond mission to document cyber cafes where international phishing attacks are launched from in developing countries.

Of course, collecting the data is easy, it's processing it, to figure out what it means, takes time.
Posted by Joe Moreno at 4:45 PM 0 comments

Goodies At My Door

Two goodies showed up at my front door, today.

The first item was a zoom lens travel coffee mug. It's a simple, yet neat looking, 12 oz mug that resembles a SLR zoom lens. As soon as I opened it and washed it out I took it for a spin at my local Starbucks with a Tall Caffè Americano where the cashier mentioned that she'd seen this mug on Pinterest. She liked it so much that, after asking me a few questions about it, she wrote down the name of the company where I bought it.

When I returned home from Starbucks a thank you gift for my donation to KPBS had arrived. It's called a Microlink FR160, but I'm not sure what category it really falls into other than emergency preparedness. At first glance, it looks like an AM/FM radio that can also tune in the weather band (NOAA) along with a built in LED flashlight. But when you look at it closer, you can see that it has built in solar panels and a hand crank to charge its internal batteries.

Even better is the fact that the hand crank can be used to charge your cell phone or other USB devices (in theory). I tried it with my iPhone 5 and a warning kept popping up, "Charging is not supported with this accessory." 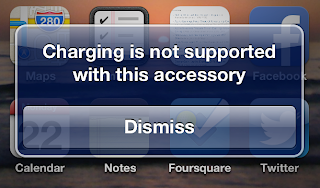 I'm guessing that the power it puts out is too dirty for delicate solid-state devices. I'll try one of these as a buffer and report back.
Posted by Joe Moreno at 6:59 PM 0 comments

Since the turn of the century, Apple has had a history of not entering many markets, unnecessarily. Unless they can put a "dent in the universe," they'd prefer to leave well enough alone. But, that's not always the case. Apple knows how to experiment and "fail fast." Most recently, they tried to displace Google Maps with their own mapping app. It was a noble attempt and Apple will continue to improve it, but a key point is if they hadn't entered this market, no one would have been critical of them. Google Maps is a great product as it stands, now. How do you beat Street View?

Apple has made minor marketing missteps like this before such as the introduction of the Cube computer (a thing of beauty), iTunes Ping social network (it only lasted two years), or Find My Friends (meh, it just never caught on since it's a creepy "pull" location based social networking experience compared to the "push" feature of Foursquare and Facebook Check In). In these cases, not too much was lost by Apple and the latter two apps teach us that Apple should probably not enter the social networking market. As a matter of fact, they've been categorized as the "anti-social company" due to their secrecy regarding their products, strategy, and stock.

One area that Apple has done modestly well, but hasn't yet dented the universe, is in TV and broadcasting. Steve Jobs referred to their current Apple TV solution as a hobby while they refine their go-to-market strategy. Investors feel that Apple is overdue to enter a new market, either by way of television or an iWatch. One thing that Apple has always been good at, under Steve's leadership, was to say, "No!" until a product was ideal and ready for the masses; and, lately, Apple certainly doesn't seem to be rushing any products out the door.
Posted by Joe Moreno at 9:39 AM 0 comments

Many investors have been hurt by Apple stock's fall from grace as it nears its 52 week lows. There have been calls on Apple to buy back stock, split, or issue a dividend to help prop it up. But, Apple's fundamental thinking transcends form over substance and not to a fault.

It's one thing to speak these ideals yet it's another thing to stick to your guns when your stock price is tanking while investors are suing and screaming. But, whose long term interests do the shareholders have in mind? Every shareholder could chose to not be a shareholder tomorrow but Apple cannot choose to not be Apple tomorrow.

I'm an investor in Apple. But, paying dividends and buying back stock are things that Warren Buffet does since he's a finance guy. Increasing share price is not what Apple's about at a fundamental level.

"Give us your money! Pay us a dividend," demanded the investors not too long ago. So, here we are less than a year later and now these same investors are calling for more money. Let's not forget that, in a publicly traded company, none of the money invested in the stock market actually goes to the corporation. For Apple, that ended with their IPO in 1980.

Apple usually forgoes form over substance. As one of the biggest corporations in the world, they have no written mission statement. Save your corporate mission statements for non-profits where they really matter. Apple has no "department of innovation." All of these fundamentals are in their DNA. Propping up stock price is not.

Virtually every dollar of Apple's $137B in cash and investments is reflected in a dollar's value in the company's stock price. Robbing Peter to pay Paul is shortsighted. You don't make money by buying stock, it's the selling where the money is made. Apple buying back its own stock is merely a gesture symbolizing that the company feels the stock is undervalued. Yes, it decreases the supply of the stock but Apple will never have an opportunity to sell back those shares when the stock price increases.

Apple really is a different type of company. When I first started working there I initially thought that it was about design. And I don't just mean industrial design - I saw beautiful design in everything: software, user interfaces, internal hardware that no one would ever see, etc. I also realized that design wasn't just how it looked, but how it worked. However, it took me a little while to figure out Apple's DNA because I initially worked in a services division that sold into the enterprise. That was two strikes against me since Apple is a hardware company which markets to the consumer. There aren't many Apple software or services that don't directly support their hardware.

If you think Apple needs to pay its shareholders more money by increasing its dividend or by buying back more stock then ask yourself, "What Apple's motivation for not doing that?" As much as I'd like to see Apple increase its dividend or buy by its stock in order to increase its share price in the short term, I know that's not what the company is about.

Apple is about one thing: best possible user experience. And that user is the customer, not the employee or the investor. Apple's metric for this isn't click throughs, page views, or market share; rather, it's unit sales – with a nice margin which is the best of business models. If you build it right then they will come and stay.

Future Prediction
At the end of the day, Apple's investors simply feel helpless as they watch the stock price drop. What these investors really want, even more than a cash payout, is to see Apple enter and dominate a new market. I predict, if Apple gets their way, that the next market will be TV and broadcasting where viewers could unbundle their cable TV packages and, say, subscribe to individual channels via an Apple TV or iOS app. After all, this is exactly that Apple did with the iTunes store.

Wouldn't it be nice (not to mention disruptive) to pick and choose which TV channels you pay for? Imagine subscribing to your local news channel, CNBC, and Spike while forgoing the weekend morning's plethora of informercials and QVC? Seriously, why am I paying my cable company to show me get-rich-quick schemes and instant weight-loss programs?
Posted by Joe Moreno at 1:59 PM 0 comments