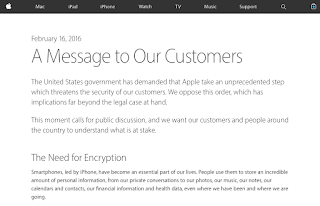 
Update 21 Feb 2016: Another point to consider is that Apple Inc. is a multi-national corporation located in different countries and jurisdictions. If one argues that Apple has to develop a special iOS version for the US government, in this single case, in the name of terrorism, then should Apple also develop special iOS versions for, say, France or China if requested? As the New Yorker’s Amy Davidson writes, “If it [the government] can tell Apple, which has been accused of no wrongdoing, to sit down and write a custom operating system for it, what else could it do?”
Posted by Joe Moreno at 10:19 AM 0 comments

How to Sell: Kickstarter Video Marketing 101

The key to selling is to point out the problem you're solving and then highlight the benefits before moving on to the features. Here's a perfect example in a two minute video.

For the past two years I've been co-coordinating a Kickstarter meetup. What started off as a monthly affair has expanded to fill the three weeks in-between the main events with working sessions for our group of entrepreneurs. Our focus is on all crowdsourcing platforms and my personal goal is to be the entrepreneur mentor I needed 10 or 15 years ago. The key transformation I've seen over the years is taking the "maker" (engineer, artist, designer, etc), who typically has an inwardly focused career as an individual contributor, and teaching them to focus outward on marketing, manufacturing, and customers. And, ultimately, turning them into sales people. At the end of the day, you have to sell, especially if you're a solopreneur or, in a team environment, you'll need to hire the proverbial rainmaker who believes in your product.

I've mentioned the importance of the Kickstarter video before. Today, I came across a perfect example of how to pitch your product, through video, in an "As Seen On TV" format. (Although this video might seem a little cheesy, it's effective and, more importantly, it's not misleading.)

1. Start with the problem you're solving. (30 seconds in this example Dash Cam Pro video commercial)

2. Show your product's benefits in a way that customers can relate to so they can imagine themselves using your product to make their own life easier or more enjoyable. (30 seconds)

4. Imprint a higher price on your customer before revealing your true, lower price. (15 seconds)
Here's why: Show the Highest Price First


This can all be accomplished within 120 seconds. The key to telling a good story is by editing away all the cruft.