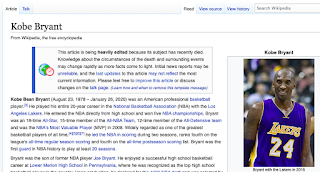 Kobe Bryant died in the crash of a helicopter he chartered, this morning. TMZ.com broke the news and the load brought down the TMZ servers... they couldn't respond to the traffic. And now, hours after his death, his Wikipedia page is highly unresponsive as people visit and edit it.

This is an extract from an article I wrote for the Marine Corps Gazette about when it's okay to lie. Part 1 of this post addresses data vs. information.

Honesty and integrity are frequently used interchangeably – but these two words have a nuanced, yet important difference.

Honesty means making your words fit reality. More specifically, it's speaking the objective truth about the past without any intention to deceive.

For example, George Washington's father asks him, "George, did you cut down that cherry tree?"

In this example, at least according to fable, George Washington's words fit reality; therefore, his response was an honest one.

Integrity means making reality fit your words. Simply put, it means that you do what you say you are going to do.

George Washington's father tells George, "George, as part of your chores, today, I want you to cut down that cherry tree."

George replies, "Yes, father, I shall cut down that cherry tree."

At the end of the day if George has cut down the tree then he had the integrity to make it happen. In other words, he got results. Integrity is the ability to do what you say you're going to do. It's about executing on your plan.
Posted by Joe Moreno at 10:31 AM 0 comments

Interchangeable Words? (Part 1: Prediction vs. Forecast and Data vs. Information)

Some words are used interchangeably, such as prediction vs. forecast. I like to think of a prediction as when we take historical observations and apply it to the future (winters are cold, summers are hot). But that doesn't tell us the weather for tomorrow. For that, we need a forecast where we apply a system of equations to process data for trend analysis.

Information is processed data. Recording the average temperature, every day, gives us data. Examining that data (processing it) yields the information that summers are hot and winters are cold. In turn, that information can become data in yet another system.

As I labored through my sunset run, today, I recalled the military axiom, "Pain's a good thing, it means you're not dead.” Which reminded me that 20 years ago I had just finished my final round of chemotherapy for late-stage, widespread cancer (stage 4 Hodgkin’s lymphoma).

My last chemo treatment was in December 1999 and, after five years of checkups, my prognosis was cured --- not remission, but fully cured --- to the point that I went back on active duty in the Marines in 2003 and deployed with them to East Africa in 2005. Today, it’s literally like I was never sick. I am lucky.

Human Being, Not Human Doing

Cancer, and my father's unexpected death in 2007, gave me a deeper insight and perspective on life. At that point, I realized I could take two or three years off from corporate America. But I didn't expect a few years to turn into more than a decade of retirement.

People ask me, "What did you do during all that time off?"

My answer's simple, "Nothing," followed up with, "What do you do on weekends? That's what I did most everyday."

Looking back on all that time off, I see that I learned how to be a human being instead of a human doing. While I did focus on my own personal projects like learning to fly, creative writing, and volunteering, it was my ability to be fulfilled while not accomplishing a single task, in a day. Some might call that lazy; I call it the simple life. La dolce vita.

While the pursuit of happiness is our unalienable right, it does require more than that to be fulfilled. It requires meaning and here's how to make meaning.

Carpe diem and live the dash.


Update: Something I completely failed to mention was I always knew my retirement wouldn't be permanent. Sooner or later, I'd have to return to full time work which I just did in August, and I'm loving it.
Posted by Joe Moreno at 7:15 PM 0 comments