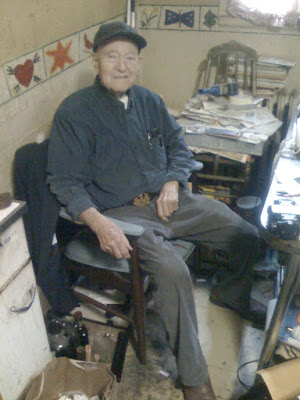 This is a personal hero of mine who I visited with earlier this week. Wynne is 94 years old and still lives across the street from where I grew up on Long Island. He's in excellent health with very low cholesterol and blood pressure of 110/70 (the secret to longevity?). He lives alone and he still drives around town.

After my father, Wynne taught me more about electricity and electronics than anyone else. He worked for Grumman for nearly 20 years. In the 1960s he worked on the LEM, training the astronauts on the spacecraft's communications systems. The radio signal to communicate from the moon to earth was about six watts which is the same of an average CB radio, except the LEM signal was highly directional compared with a CB's omnidirectional signal. He gave me a few of the LEM's amazing training manuals.

During WWII Wynne served in the U.S. Merchant Marines (starting in the enlisted ranks and working up to LCDR) so we frequently talk about the ship's steam cycle. But, my knowledge can't compare to his years of experience working in the engine room. He has some great stories including one time when he was in a tsunami out at sea. The ship's captain received warning of the coming wave and simply turned into it as the ship rose and dropped more than a hundred feet. After all, as long as a tsunami is in waters deeper than its wave height it won't "trip" as it does when reaching the shore.

In high school, he taught me about firearms. We used shoot .22s in his basement against a steel bullet trap and we'd usually end a shooting session by firing black powder after casting the musket balls or minie balls ourself with a lead melter. A couple times we went to Maine to shoot his M1911, made in 1917, and his 45-70.

About once a year he sends me books on the Marine Corps or Annapolis with personal inscriptions on the inside cover. This week he gave me The Few and the Proud, Jarhead, and One Bullet Away.

When I was in 8th grade (1981) I took a trip to Bellmawr, NJ (not far from Edmund Scientifics) to buy my first laser from Metrologic Instruments. Back then, laser diodes didn't put out much power so helium neon was the only practical option I could afford from delivering Pennysavers and newspapers.

The laser in this photo is a modulated laser which means that you could plug in a crystal microphone and talk over the beam of laser light. I purchased this one, and a few months later I purchased polarized laser, to make holograms in my basement.

Originally, I intended to build a sandbox to make the holograms but I found a clearance holography kit at Edmund Scientifics. The kit was basically 2' x 2' piece of black Plexiglass on black foam with some screw holes to hold an optical diffuser (not a lens), front surface mirror, and film holder.

My first hologram was my best because I didn't know that you shouldn't recycle photographic developer chemicals. It was a hologram of Boggle cubes (dies with letters on each side) that misspelled Hologram. (I originally spelled it correctly, but when I moved the holography kit to the darkroom lab I hastily set up the cubes incorrectly.)

I was definitely the only kid in school who owned a laser... actually two lasers.

Amazon's SimpleDB is to a RDBS as...

It took me a little time to wrap my head around Amazon's new web service: SimpleDB. But, I think I've finally fit it into my RDBMS brain.

Down Markets are a Beach

It's not that I don't care about the down markets, but sometimes, a little change of pace can be a nice break. After working out this morning I took a couple hours and went to the beach – it was in the 80s, again, today.

After taking a refreshing dip in the ocean I just laid out, in the sun, for a nice bit.

Sorry, folks. It's been busy since we launched Adjix in August. I'll write when I have some time.

You can always follow those happenings at http://blog.adjix.com.
Posted by Joe Moreno at 7:39 PM 0 comments