Innovation is anything that reduces the cost of a transaction – but is that necessarily a good thing?

The ideal application of any technology is something that enables you to be more productive while getting out of your way. This is the challenge with technology. Speaking on the phone is a great way to communicate, but subtle cues are missed such as facial expressions. Even with video chat the technology distracts and diminishes communication since users have to be concerned with trivial conditions like lighting and frame composition (i.e. how well can the other person see your face). The very enabling benefits of technology can also get in the way.

Now we face the challenge with humanizing technology.

We see technology dehumanizing us everyday – and I am guiltier than most as seen in this video making the rounds the past few days. Rather than accepting the interruption of technology, we need to integrate it in better, more subtle ways.


Last year, I mentioned how paperwork has been virtually eliminated from the cockpit due to the iPad. But, when flying through the clouds, pilots still need the old pen and paper.

There are two sets of rules pilots follow when flying an airplane: Visual Flight Rules (VFR) and Instrument Flight Rules (IFR). In order to fly under VFR I need to be able to see a few miles and keep my distance from the clouds (the distances vary depending on the type of airspace I'm flying in).

A key limitation when flying VFR is that I am not allowed to fly into the clouds since I can't see who else might be in there. This problem is easily solved by filing an IFR flight plan since air traffic control will track me on radar and give me a specific route to fly.

Flying IFR is more complicated than the simple "see and avoid" technique used when flying VFR. For example, what do you do if you're flying under IFR in the clouds and you lose communications? (There are specific procedures to follow in this case – needless to say it's not a situation any pilot wants to find themselves in.)

Before departing under IFR I will file my IFR clearance request and then it will be issued to me just prior to taking off. It helps to know what clearance I'll be issued ahead of time since it's a mouthful to write down, as it's being issued, and then read back as you can hear in this simulation.


To make things flow smoothly I jot down CRAFT (orange oval) in a column to remember all parts of the clearance:
C – Cleared to (usually my destination)
R – Route to fly (blue rectangle in photo)
A – Altitude to climb to
F – Frequency to switch to after departure
T – Transponder code to squawk so ATC can track me on radar

While it's perfectly acceptable to get an IFR clearance issued after taking off it certainly makes things more complex since I'd have to write all this down while flying the plane. It's much easier to do on the ground. Lightening a pilot's workload is the reason commercial airlines have two pilots (the captain and first officer).

Once I'm airborne ATC will usually guide me to fly a specific route until I'm established on my flight plan. It's handy to have ATC act as a second set of eyes looking out for my wellbeing. Occasionally, ATC will give me course adjustments to deviate for bad weather, traffic, or to shorten my route. If I have no course adjustments then the only thing I need to write down are new radio frequencies as controllers hand me off from one radar sector to another.

iPads are great but for quick notes, nothing beats a pen and paper.
Posted by Joe Moreno at 4:29 PM 0 comments

Today I had two firsts. I commuted on the San Diego public transit bus system and, this evening, I received a package from Amazon using their Locker delivery service.

Everyone's familiar with public buses, even people who never use them. But the Amazon Locker delivery service just started last year. It's perfect for people who live and work in big cities and don't want packages left sitting at their front door.

Instead of having your package shipped by Amazon to an address, they deliver it to a bank of lockers that they own, spread throughout the city. The shipping charges seem to be no different than if the package was shipped to your front door.

This evening, I received a confirmation e-mail that my package was ready for pick up. So, I hopped on the bus since the nearest bus stop is just a few hundred feet from my place. The last stop on my bus route was right outside – less than 100 feet – from the 7-11 where Amazon has a Locker delivery location. A perfect synergy since they're open 24/7.


Picking up my package was so quick I ended up reboarding the same bus that dropped me off because the driver had a five minute break. But, since my bus fare card is unlimited there was a "read error" when I tried to swipe it which the driver dismissed when he realized that I was the same person boarding the same bus.


Both the bus and Amazon Locker services were great customer experiences  – much better than I expected. Door-to-door was well under an hour for this two mile roundtrip  Best part is that the bus ride was effectively free and I didn't have to hunt for parking downtown. 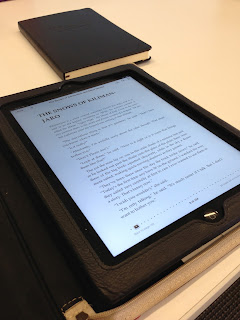 I love iBooks but nothing beats the durability of a real book. As great as it is to carry around my e-book library on my iPad, it can never compare to the feel of picking up a real book and flipping through it. That's a physical experience sorely lacking on all e-book readers.

So, can the real world feel of a book be duplicated electronically?

Perhaps.. one day... probably. The key is that a digital book would have to feel like a real book. One way to do this is with a digital book made of pages where each is a thin, flexible film, like e-paper, that feel like real pages.

Imagine an e-book full of a couple hundred blank pages made of thin, bendable computer displays. You'd select which book to load and each e-page would display a page of your book. You'd be reading e-ink text on real pages that you could flip through, highlight, take notes, etc.; much like iBooks or Kindle. Just don't dog-ear a page. For books longer than 200 pages, you could just cycle back – page 201 would appear on page one and so on. Now that would be best of both worlds.
Posted by Joe Moreno at 7:58 PM 0 comments

The Photo Behind the Photo

Last month I was walking to a San Diego Tech Week event with a former Apple coworker, Michael. He has a great eye for design and his work was regularly reviewed by Steve Jobs.

As we walked down the street, a woman stopped to take a photo, through a chain link fence, of some interesting artwork. As she snapped the photo, Michael had the presence of mind to snap a picture of this stranger. He showed her the photo and they exchanged phone numbers so they could text the images to one another.

Less than thirty minutes later, while at the event we were attending, Michael received the photo at the top right and we marveled at the impromptu collaboration that had just occurred.

We don't know who the woman was, but, like Michael, she too obviously has a good eye.
Posted by Joe Moreno at 3:02 PM 0 comments