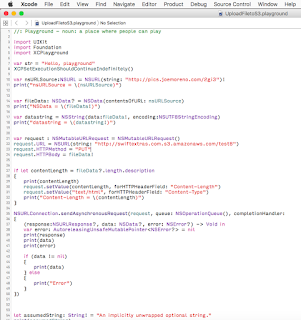 Hacks are simple shortcuts that increase productivity. They can be inelegant, but they solve a problem quickly. Hacks may be brittle, solving a problem under specific conditions, or they can require a few extra steps to realize the effective solution. An ideal hack is an innovation or design pattern that works so well it becomes a feature. My favorite non-technical hack (life hack) is one I use after hunting for a parking spot when they're scarce. In the past, I've parked my car and rushed off to my destination without paying attention to where I parked. This has happened to me a couple time in La Jolla and Pacific Beach. So, one life hack I use to remember where I've parked is to open up the Maps app on my iPhone and take a screen shot as soon as I am parked.

I've come across a few computer hacks that stick out in my mind. Computer hacks are harder to explain than life hacks because one has to have an interest in software engineering. But, here goes...

One area that I focused on was coming up with a way to prevent JPG images from being "stolen" from a webpage. Once an image is displayed on a screen (computer, smartphone, etc), there's no simple way to keep someone from taking a screen shot. My Java applet solution got around this by taking the thumbnail of the image and blowing it up to the full size image so that it was pixelated (blurry). Then, as the user moused over the image in the applet, a small portion would come into focus. This allowed the user to see the entire image at full resolution, but only in parts (one-sixteenth, to be exact). While it was possible to take 16 screen shots and piece them together into a single, full resolution image, that was far from practical.

The full size image was encrypted on the web server to keep a user from downloading it directly from the server. The encrypted image was then sent to the user's web browser and decrypted in pieces, while in memory, inside the client's applet as they moused over the image.

Awhile back, I heard about a brilliantly simple trick that Facebook uses to speed up their site. When a Facebook user logs into their account, their data is fetched from a database. While fetching the data, the user has to wait. The amount of wait time could be imperceptible to the user, or it could be a noticeably long time if the website is under a heavy load. "Heavy load" is a relative term, but Facebook serves more than two billion active users per month, so saving any amount of time makes a noticeable difference at that scale.

Wouldn't it be great if Facebook's servers knew what data a user needed before the user formally requested it? Well, that's effectively what Facebook's done with their little trick that simply involves sending an encrypted UDP (datagram) ahead of the formal TCP/IP request. UDP requests are fire-and-forget, meaning there's a small chance they might not arrive at their destination, but, if they do arrive (and they usually do) then they'll reach Facebook's servers sooner than a TCP/IP request. There's more overhead with TCP/IP since it guarantees delivery (or notice of a failed delivery). TCP/IP is the reason that webpages render perfectly compared to the BBS's of the 1980s that used unreliable dial-up modems where static and interference would be misinterpreted as data and displayed as garbled text.

So, the UDP datagram arrives ahead of the TCP/IP request which enables Facebook's servers to pre-fetch the data and load it in its cache before the formal TCP/IP request arrives. This hack is a simple, yet elegant, way to optimize a website for speed simply by "priming the pump."

DNS: Safari speeds up webpage load times by looking at all the host names on a webpage, once it's loaded, and then performing a DNS lookup. This saves time, later, when a user clicks on a link since the DNS lookup has already been completed. The time savings might go unnoticed or it can save a few seconds. (There's even an HTML tag to help DNS prefetching.)

In the late 1990s, I started going to races (5Ks, 10Ks, marathons, etc), snapping race photos at the finish line, and then selling them either at the race or online. The challenge was finding a runner's photo among thousands – bib numbers had to be entered manually, which would take many hours. I came up with a solution that worked great which, to my surprise, no other race photography had implemented. (Nowadays, RFID chips attached to the racer's running shoes solves this problem.)

My solution was to simply synchronize the time on my digital camera to the race clock where midnight (00:00 on a 24 hour clock) was the start of the race. If a runner finished a race in 23 minutes and 30 seconds then they could simply start looking for their race photo around 00:23:15 (23 minutes and 15 seconds after midnight) since the photos were taken about ten seconds before the runner crossed the finish line. 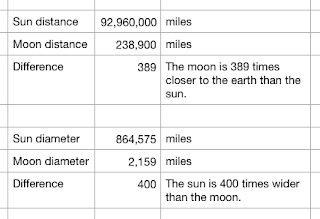 With all the news about next week's solar eclipse, I was thinking about why we always see the same side of the moon.

The answer is simply because the time it takes the moon to orbit the earth is the same amount of time it takes to rotate on its axis (about 27 days).

That got me thinking...

Why does the moon nearly perfectly block out the sun during a solar eclipse?

My conclusion, after running some calculations, is that the sun is 400x wider than the moon but it's also nearly 400x farther away. 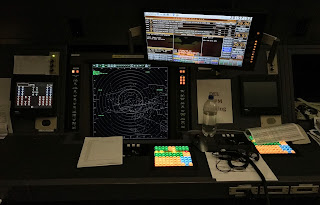 I took a tour of an air traffic control facility, this afternoon, and learned a few things from a controller's perspective. We couldn't take photos as we toured the actual floor of the air traffic control center, but we were allowed to snap pictures in the training center; they look almost identical.
1. There are three basic types of air traffic controllers, each of which is highly specialized: those who work in the towers at the airport, those who work in the "centers" that handle en route traffic, and approach/departure terminal controllers who handle traffic arriving and leaving the airspace outside of an airport. So, a center controller hands traffic over to a terminal controller who would then hand traffic off to a tower controller for landing at an airport. Simple concept, tricky execution, especially when there's a VFR pilot flying close to controlled airspace (like Class B) and not talking to any controllers, which is perfectly legal when flying VFR (i.e. not on a flight plan).
2. Air traffic controllers jokingly refer to jumpers (parachutists) as "meat rockets." (Parachutists don't show up on radar.)
3. For IFR pilots: It's rare that a controller will ask a private pilot to fly an "unpublished hold," especially on a VOR. In other words, it would be rare for a controller to tell a pilot, "Hold east of the Oceanside VORTAC on the 090 radial, left turns, maintain 5,000', expect further clearance 0+50." The controllers probably wouldn't know the exact phraseology, either, and VORs are going away in lieu of GPS. For private pilots in small (slow) planes, controllers would rather simply give a pilot vectors to fly a box rather than a racetrack (see last photo).
4. Everyone knows "Mayday. Mayday. Mayday," but no one seems to know or use "Pan-pan, pan-pan, pan-pan." Mayday: Emergency (from the French, "m'aider" meaning "help me"). Pan: Urgent problem (from the French, "panne" meaning "breakdown" – think of it as Mayday lite). 🛬 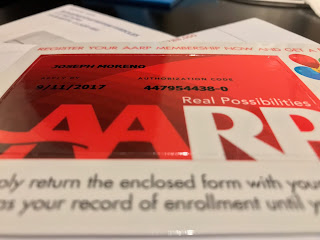 Now, I am officially old. I have that old-man smell like mothballs and Aqua Velva. As a matter of fact, when I had a question earlier today, instead of looking up the answer on the Internet, I e-mailed a buddy asking him to explain it to me.

Some say that age is a state of mind, but there are absolute signs of “old age” and I clearly received one of those, this week: My membership offer for AARP. If I pay $16 to join in the next ten days then I’ll also receive a FREE Sport Tote.

So, hit me up if any of you young whippersnappers need to know how to use Compuserve, Prodigy, MySpace, pogs, carbon paper, a fax, or 8-track. I'm your (old) man. (Sorry, I can’t help you with computer punchcards… I’m not that "experienced.")

You can e-mail me at my AOL e-mail address and I'll respond as soon as my secretary prints out your e-mail for me to read. (I jot down my response on the bottom of the page and then she types up my reply.)

More importantly, I’m currently looking for work as a Y2K consultant, so keep me in mind if you spot any job openings.

Also, I have a bottle of witch hazel in the valise on my Davenport, in case you need any. #groovy #swell

Now please excuse me while I chase some kids off my front lawn and then head to the beach with my metal detector after going for a ride on my recumbent bike.

How to Stop Google From Storing Your Voice to Text Recordings

Today, I ran across an article pointing out that Google is storing your searches and queries, including your voice to text dictation data.

I forgot that, many years ago, I had turned off all of these features, so Google doesn't report to me any history of my activity on any of their websites. But, I surprised some friends when I showed them how Google was storing their info. It is relatively easy to see what personal data they're recording. Simply visit the following webpage when you're logged into one of your Google accounts:
https://history.google.com

The following link will take you, step by step, through a Google privacy checkup where you can tell them what personal data you want them to record:
https://myaccount.google.com/privacycheckup 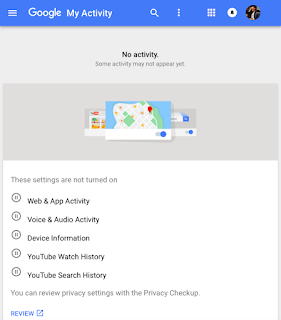