It Can Always Be Worse


Plebe Summer, at the Naval Academy, is about sacrifice. It's about learning how to deal with failure as a team. Even though I knew it was a training environment, it didn't make it any less stressful. We were constantly tested on more knowledge than anyone could learn. That was the point – learning how to deal with failure while being part of a team. Sometimes... many times... that meant sacrificing your comfort, enjoyment, or pleasure in order to help someone else suffering worse than you. As Plebes, we were all in it together.

We learned what it meant to have honor. We learned to never sacrifice others for our own well being, even when we thought we'd never get caught. This isn't something you do sometimes or most of the time, it's something you do all the time. It only takes one dishonorable act to forever taint your honor. We were taught a lot, at the Academy, even when it's okay to lie.

The Naval Academy challenges all of us in three key areas: military discipline, academics, and sports (all Midshipmen are required to play a sport).

During Plebe Summer, I was playing squash. Every afternoon, we went to our sport. Our squash practice consisted only of Plebes, and an old, retired, Navy captain who was our coach.

One Plebe, who was struggling to learn his required knowledge, didn't practice squash; instead, he'd sit up against the wall of a squash court and study his handbook. I could tell, by looking at him, he was stressed out.

"Put down your damn Reef Points, pick up a racquet and get on the court," said the coach to the overstressed Plebe.


The Plebe appealed to the coach, thinking that this gentle old man would understand his predicament since he had once been a Plebe in the 1950s.

"Sorry, sir, I'm very stressed out," said the Plebe as a group of us watched the exchange.

The squash coach's patience had run out and he shot back, "Try spending six years in a POW camp and see how that stresses you out." Then he walked off.

Our eyes were as wide as saucers. This old squash coach had been a pilot, who was shot down in Vietnam, and spent six years as a POW. We scattered like roaches, onto the squash courts, and resumed playing squash. In that one sentence, we realized the indelible lesson that it can always be worse.
Posted by Joe Moreno at 8:14 PM 0 comments

Yesterday, I was at Balboa Park during a parade which had a couple hundred thousand attendees. Whenever that many people get squeezed into a tight venue, such as a stadium, cell phone connectivity becomes an issue – and yesterday was no exception.

At one point, I launched an app on my iPhone which was taking a long time to open up since it needed Internet access. Just as I closed the app it popped up three modal dialog windows in a row. The app was closed, but the modal windows blocked all other iOS interactions as if the phone was frozen.

To restart the iPhone, all I needed to do was press the volume up, volume down, and then the sleep/wake button. This brings up a slider at the top of the screen, "slide to power off." But, the problem was this slider was blocked by the modal window.

I tried pressing all three buttons and holding them down. Unfortunately, this activated the phone's emergency mode which dialed 911 and then sent out SOS text messages to my emergency contacts with a map of my location. The police called me back with an automated message stating that they received a hangup call but couldn't pinpoint my location. However, even though my phone had location services turned off, it seems the phone was able to know my location and sent a pin-drop to my emergency contacts along with an SOS message.

What I needed to do was force restart my iPhone, but I didn't know how. Luckily, my buddy had his iPhone (also with spotty connectivity) and we did a Google search. A force restart is similar to a typical restart, except you hold down the sleep/wake button until you see the Apple logo: 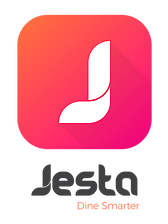 Today, I had lunch with the founders of Jesta. I have been wanting a restaurant customer experience like Jesta for years. It's like Uber for dining in at a restaurant. 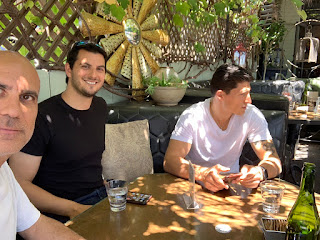 I simply pointed my iPhone at the QR code on the table and the Jesta app displayed the current menu for the restaurant, with photos of the items I could order. I tapped on each item and then sent my order to the kitchen, along with my payment and tip.

The best part is there was no need for me to wave down the food server when I was done eating. I could simply leave since my bill was already settled. Simple!

It all worked exactly expected. Jesta is in about half a dozen restaurants in San Diego, and growing. I hope they're able to raise a round of funding to put them over the top for marketing. Innovation at its best.
Posted by Joe Moreno at 3:22 PM 0 comments