When I was watching “The Sopranos,” S1 E9, “Boca,” beginning around 34:21, the dialogue trigged “Hey Siri” on my HomePod. It’s the scene where Artie tells Tony to lay off the soccer coach, and they tell Artie the soccer coach’s dirty secret. It happens every time.

Advice to USNA Class of 2018: Be Decisive

The Basic School (TBS), in Quantico, VA, is where second lieutenant Marines are trained to be "Officers of Marines." The key principles I was taught there were leadership and decisiveness. Leadership in the military is, in many ways, similar to leadership in the corporate world in that your authority comes from your job position. Obviously, rank, in the military, also reinforces a person's standing.

Decisiveness is the ability to make timely choices and take action. The challenge with decisiveness, especially in the military, is learning how to make decisions with incomplete information. At TBS, we were taught that a good decision, made now, is better than waiting for ideal information, that may never come, in order to make a perfect decision, later. This tenet taught me how to prioritize tasks by repeatedly focusing on my choices before and after, it until it became second nature.


When to make a decision?

I believe it's important to make a decision as late as you can, if the delay has no penalties. It's OK to decide not to make a choice, now, if a decision isn't necessary. Sometimes, I would explicitly state why I was putting off a decision. As an oversimplified example, "Tonight, I don't need to decide what I'm going to have for lunch, tomorrow, because we won't order lunch for another 15 hours."

But, in the military... especially in combat... we were taught to make the best possible decision, right now. All too frequently, when we were faced with an important tactical decision, our senior officers (captains), who were training us, would yell at the leader, who was taking too long, "Make a decision, lieutenant. Right now. Make a decision."

When I was the lieutenant in charge and I heard this, it put a tremendous amount of pressure one me as I was forced to make an immediate decision in front of those I was leading. My solution to avoid this in the future was by staying one step ahead of the situationat hand. (An important skill that was reinforced when I was training to become a pilot.) More and more training that's as realistic as possible (rehearsals) helps, tremendously. But that's not always possible. My backup was to instantly recognize what choice I could make, now, that would further our mission while maintaining a responsibility to the long term.

A colonel once told me he kept his decision skills sharp by always planning for many possible scenarios. For example, he said that, when he's driving, he always made sure he had a way out. Specifically, the colonel told me that would not pull up too close to the car in front of him, at a traffic light. If the car in front of him stalled at the traffic light, he still had enough room to turn out of his lane while continuing to move forward. (Why retreat when that's not the direction you want to go?)

Getting into a good habit is called self-discipline. Discipline is to the Marines what innovation is to Apple, except, in the Marines, discipline will literally save your life, both in combat and training.

When to change a decision, without being indecisive?

Simple decisions can be made and reversed if there's no cost or penalty, "I know that I wanted to have a tuna salad sandwich for lunch, earlier, but I've decided to place my order for the chicken club." There's nothing wrong with that since I hadn't yet placed my order. But, I wouldn't call back, after ordering my lunch, to change my decision once I've finalized it. That would be indecisive. I would rather live with my decision to eat something I didn't fully enjoy rather than flip-flop. That's how I live with my decisions.

Putting off a decision, as long as possible, keeps your options open. But, in a life and death situation, that delay to consider your options might only be seconds.

My key principles in figuring out when to change a decision are:

1. Has new information come to light that wasn't available, before; and, if I don't change my decision, will my mission fail or will my earlier decision violate a key principle, policy, or law?
To maintain integrity, I take this one step further. New information doesn't mean information that was available six months ago, but I was too lazy to research; new information means there's no way I could have/should have known about it before making my decision. A person's judgement is only as good as the information it's based on.

2. Will changing my decision significantly simplify the task at hand, while still accomplishing my mission; and can the change be promulgated to all parties in a very timely manner?

Good decisions, based on principles, make for strong leaders.

Here's a minor mystery that has me stumped.

Last week, I gave my Apple Talk in the Bay Area to a business delegation from China. I began the talk with a group selfie. As I snapped a few pictures, the group got up from their seats and huddled in the center of the room so they would be in my photo.

A little after midnight, a woman who attended my talk posted some photos from my presentation (she's in the front row, next to my left ear). At first, I didn't think anything of it when I saw she posted one of my selfie pics. Then, when I looked closer, I noticed that the selfie pic she posted wasn't one of mine. After comparing all of my group selfie pics to her photo, I noticed that it was from a slightly different vantage point. This had me (and still has me) puzzled. When I snapped my photo, I was standing in front of the room, up against the whiteboard, and there was a desk between me and the audience. In other words, no one was in front of me or near me.

So, how or where did she get a similar group selfie photo?
After looking closely at her photo, I noticed a black line, in the upper left of her photo, which I've concluded is the edge of my phone. It seems that the picture she posted was a photo taken of my phone's screen as I positioned my phone and preparing to take the group selfie. Clever.

This theory of mine seems to make sense, except I can't figure out where the camera was located in the audience (lots of audience members snapped photos throughout my presentation). If you take a selfie photo of someone when they're taking a photo of your phone's screen then you'd expect to see them in the selfie picture.

My best guess, without claiming any "my phone was hacked" conspiracy theories is that the camera, which took the photo of my phone's screen, was out of frame or blocked from view by another person, despite the fact that her photo looks to have been taken head-on. And that theory seems to make sense because the same woman, later at Apple Park, showed me some photos she took of my presentation and she made the point that her phone's camera software (not an iPhone) had the ability to remove the keystone effect when a photo is not taken perpendicular to the subject. Basically, her phone's software has the ability to remove distortion from photos taken at sharp angles.

I still want to know where the camera was located in the audience that snapped the photo of my phone screen. Hmm.

Update 24 May 2018: Hear ye, hear ye. It took a couple weeks, but the mystery has been solved. It turns out that the inexplicable selfie photo was taken by my translator. She was standing next to me, in the front of the room, as we began and she took a selfie at the same moment I did, except she was out-of-frame in her photo.
Posted by Joe Moreno at 3:40 PM 0 comments 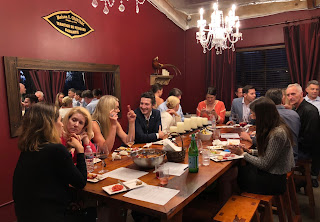 
Today, I learned that a truffle is actually the fruiting body of a fungus that grows underground. Lovely sounding, eh? Chocolate truffles were named because of their resemblance to the subterranean fungus. 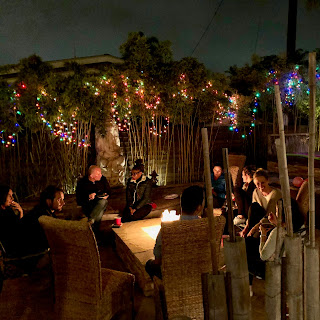 Last night, I was at a party in Mission Hills that was 90% French. I could count on one hand how many people didn't speak French. Lucky for me, everyone spoke English.

One thing that stood out was that the younger people where discussing their strategies for staying in America. Some were software engineers, EE, interior designers, Realtors, etc, as they compared notes for visas, timeframes, and costs for lawyers and applications fees. I take it for granted that, as an American, I can live here and do nothing. Even the people from the South of France were loving Southern California. I have a feeling that I'll be seeing these people around in the foreseeable future.
Posted by Joe Moreno at 9:13 AM 0 comments