When is it OK to Lie?

A version of this article was originally published in the Marine Corps Gazette in 2006.

Summary: It's OK to lie and be deceptive.... under certain circumstances.

Purpose: The intent of this post is to suggest a common ethical standard for managers to set for their direct reports. 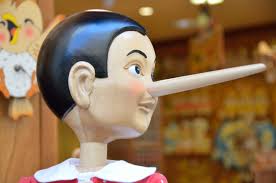 What exactly is a lie, and when is it OK to tell one? All leaders should know that we are watched by our subordinates in everything we say and do. One dishonest statement from our lips and all who hear it will either question our fidelity in the future or, even worse, follow our example.

Good definitions make for clear ideas. We often speak of honesty and integrity, but what do those words mean? Here are some clear definitions with concise examples.

Honesty deals with the past. It means making your words fit reality, or specifically, to speak the truth about the past. For example, George Washington’s father asks him, “George, did you cut down that cherry tree?”

George replies, “Father, I cannot tell a lie. Yes, I cut down that cherry tree.”

In this example, borrowed from fable, George Washington’s words fit reality; therefore, his response was an honest one.

Integrity deals with the future. It means making reality fit your words. Simply put, it means to do what you say you are going to do. For example, George Washington’s father tells George, “George, as part of your chores, today, I want you to cut down that cherry tree.”

George replies, “Yes, father, I shall cut down that cherry tree.”

At the end of the day, if George has cut down the tree then he had the integrity to make it happen. In other words, he got results, or as we used to say in the military, mission accomplished. Another way to think of integrity is the ability to do what you are supposed to do.

What is a Lie?

Poor planning can put people in a situation where they may end up doing something unethical to fix a problem. A lie is the intention to deceive or not let the whole truth be known. But, there’s more to it than that.

Explicitly stating the following definition of unethical behavior to your direct reports will go a long way to setting a standard for office business ethics.

Unethical behavior is:
– Committing or soliciting an illegal act.
– An intention to deceive or not let the whole truth be known.

The following are four exceptions where deception would be OK.

– Warfare. Sun Tzu wrote, “All warfare is based on deception.” We’re talking about bona fide warfare between a country and its enemy, not between you and your next door neighbor. This deception is aimed directly at the enemy, not at a friendly intermediary.

– Entertainment. A deception for entertainment purposes means all involved are aware of the deception. For example, a quarterback fakes a handoff and drops back to pass; a magician performing a trick; you tell a joke, “Your shoelaces are untied.”

– Personal or professional business.
• Personal: A social expectation of privacy that does not violate an organization’s policies or law. For example, you should not feel compelled to answer questions such as, what is your net worth, or whom did you vote for in the last election?
• Professional: The law sometimes allows deception, such as a police detective lying to a criminal in order to collect information, or a spy with a cover story, or as is the case with classified information, not revealing any knowledge of the information to unqualified parties.

– Social lie. A social lie is an untruthful statement to protect the feelings of others and from which the lying party gains no benefit. For example, the CEO of your company invites you and your spouse over for dinner. During dessert you whisper to your spouse that the coffee tastes like turpentine. A minute later, the CEO’s spouse asks you, “How do you like my coffee?” It’s perfectly acceptable to answer, “Fine.” However, in a different situation, it is not OK to lie to your spouse, citing the personal or social exceptions above, for reasons such as “she wouldn’t understand” or “it would hurt her feelings if she knew the truth” about something you did.

When you lie on paper, such as backdating a document to deceive inspectors, it is called fraud. But, backdating, say a promotion, which is done openly, is not unethical.

Sometimes, when people get into trouble, they will speak the truth with the intention to deceive. This technique usually involves some sort of distraction to lead the audience down the wrong path. Once again, there is an intention to deceive that does not meet one of the four exceptions above, especially since the liar’s sole purpose is to save his or her hide.

These examples will not solve every ethical dilemma. There are ethical questions – such as is abortion OK under certain circumstances, or should the government enforce capital punishment – that are beyond the scope of this blog post. But, these are not issues we face on a daily basis. Rather, the rules above should be good enough for most issues we face at work.
Posted by Joe Moreno at 1:38 PM