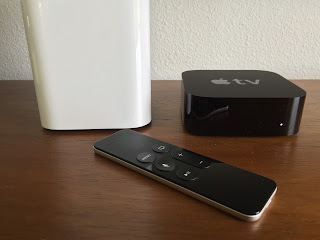 Adding Siri to the remote flattens the navigation hierarchy.
Simple voice commands like "Play jazz," "Rewind 20 seconds," "Turn on closed captioning," and "Play episode 3 of season 1 of Mad Men" make for a superb user experience. The remote has its own firmware and its powered by a sealed battery that's rechargeable through a Lightning connector.

One thing I was wondering was why the remote has both infrared and Bluetooth since it seems only the latter is needed to communicate with the Apple TV. Then I tried raising the volume when the remote wasn’t pointed at the TV. The Apple TV LED flickered, indicating it had received the signal from the remote, but my TV volume didn’t change until I pointed the remote at it.

I'm speculating that it seems that HDTV volume isn’t commanded by the Apple TV remote, as I originally thought, rather it’s controlled by a standardized IR remote signal beamed from the remote.

Update: Here's my Twitter conversation to prove that I may not know exactly what's going on.
Posted by Joe Moreno at 3:05 PM