Suicide Prevention: The One Question to Ask 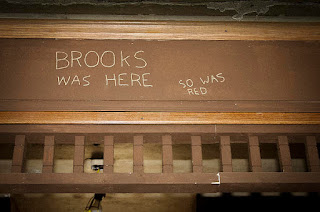 As a military officer, I received frequent training to make me a more effective leader. We started off as second lieutenants (or ensigns, in the Navy) and we were young and green. As twenty-something year-olds, we're assigned dozens of direct reports and we quickly learn how to motivate those in our charge. The training is important, but it's not until we face the actual experience that we learn how to deal with different situations.

I learned how to recognize the signs of problems outside of the workplace. How do you deal with domestic violence, depression, suicide, and death? Death was obviously the most serious, so we did everything possible to avoid it with safety briefs before long weekends and getting help to those who needed it.

One area that's always tricky is depression, which can lead to suicide. This has become more common over the last dozen years due to PTSD. Distinguishing between a suicidal gesture and a suicidal act is semantic hair splitting since both require immediate attention.

But, when people are depressed, it's hard to know how bad they truly feel. How do you find out if someone's suicidal? Simple... ask them, "Are you thinking of hurting yourself?" Phrase your question exactly like this and then wait for their answer. Don't fill in the awkward silence with anything but quietness until they answer your question. You'll want the answer to be, "No," but don't lead them there if that's not where they're headed. They won't lie if they have suicidal thoughts – they want to feel better. If the answer is, "Yes," you'll need to consult with a mental health professional. Don't leave them alone, thinking that you somehow talked them out of it. Suicide watch is the immediate next step.

This is a simple, yet direct question, to ask if suicide or self-harm is suspected. In all the times I've asked it, I've never offended anyone. The Semicolon Project, which has been around since 2013, is a great resource to turn to if you, a coworker, or loved one needs help. Why a semicolon? Because a semicolon is used when an author could’ve ended a sentence but chose not to. You are the author and the sentence is your life.

Your story; it isn't over yet. 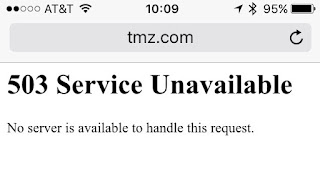 On June 25, 2009, I listen to Guy Kawasaki speak in San Diego. About half way through his presentation of demos on social media he gave a shout out to the audience of 500 about me and my company, Adjix. Everyone seated at my table turned and looked at me, "Who's this guy?" I was feeling great after leaving that breakfast presentation until I got home and learned that Michael Jackson had died. I wasn't a big fan of MJ, but his music is... powerful art. What quickly got my attention was that a customer had used Adjix to link to the news of MJ's death creating a huge load on the Adjix app servers. The web and database servers were humming along, without a problem; but the apps were bottlenecked by REST calls across the Internet. With the CPU cores pegged at 100%, I began manually spinning up more app instances to balance the celebrity server overload – which lived up to my expectations. 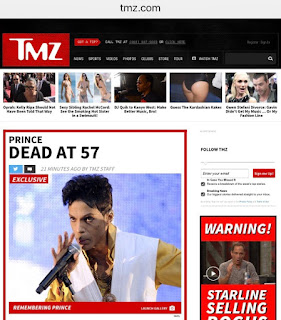 This morning, Prince died. Prince and the Revolution were my first rock concert when I was a kid. Prince wasn't suppose to be my first... Styx was... but Tommy Shaw hurt his hand, as it was reported in the news, and the Styx concert was cancelled (not postponed).

To confirm the news of Prince's death, I went to TMZ.com but their servers were down, "503 Service Unavailable." That HTML error code simply means, "No more! Uncle! I'm temporarily overloaded."

After giving TMZ.com a little time, their servers were handling requests, again. "Damn it. Prince is dead. And he's young, too young to die this soon."

1984 and Purple Rain had a powerful impact on me. Prince was a key soundtrack to my youth. ❖

A world of never ending happiness
U can always see the sun, day or night

When I was in high school, I considered joining the Air Force. "Aim High." It seemed to be a natural fit for my high tech interests. At school, one of my classmates began sporting a military style crewcut – he'd signed up to join the Army after graduation. Shortly after that, I saw a Marine Corps recruiting ad in a magazine. The only thing I knew about the Marines was that they had, inarguably, the toughest and longest boot camp training in any of the Armed Forces. I asked my father, who had served in the Army, "Why would someone join the Marines?"

"Some men want a challenge," he said.

Some men want a challenge... that resonated with me, which I've written about in Six Four One. As a kid, it resonated like, "You did a good thing for a bad man," from a Bronx Tale. Since then, I've loved the challenge of boot camp, plebe year, OCS, jump school, and overseas deployments. Now, in my more seasoned years, I find myself seeking more conveniences and complaints than challenges and commendations. Every so often I need a refresher.

A couple weeks ago, Sugar Jones and I were discussing Instagram. Instagram has been around since 2010. In 2012, with only 13 employees, it was purchased by Facebook for about $1B. It's only grown in popularity since then. Instagram's key differentiator was two fold. It was simple to post and photographers could apply filters. Since cameras on smartphones, back then, weren't as good as today, applying a filter helped distract from the graininess by adding an artistic spin.

"Every photo has to be square," I said with disdain. I pompously believed that the artist should choose the aspect ratio.

That's the challenge... Ah-ha! Those three words, which she so profoundly said, instantly sunk in.

One hundred and forty characters is the challenge of Twitter; that's what makes Twitter unique and the haiku of a new millennium. How could I have missed a similar challenge with Instagram?

To hijack and repurpose from Breaking Bad...
When I heard the learn'd Sugar.