The best part about 3D printing and laser engraving at the Central Library is it's free. 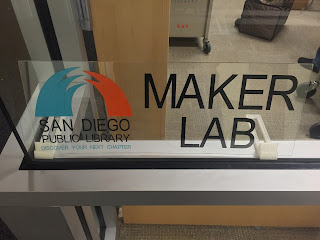 I'm writing this in the Main Reading Room of the San Diego Central Library after touring their new Maker space. This library opened about two and a half years ago with commanding views of the Coronado Bay; and they've already outgrown their original Maker space consisting of a few 3D printers and electronic sewing machines. Now, they're ready for more Maker mentoring in their new location on the third floor.

The library has recently procured additional Maker hardware including an Epilog Helix laser cutter and engraver. With 50 watts of lasing power, library patrons can cut and engrave most anything from cork and wood to plastic and glass. Through an agreement with the library, entrepreneurs can sell their wares on e-commerce sites like Etsy.com.

But, innovation is not so much about the technology as it is about the people who make it happen. And, at the Central Library, that honor goes to San Diego's Emerging Technologies Librarian, Uyen Tran. She's worked at the San Diego Public Library for nearly15 years and her passion about about technology and its roles in libraries is contagious.
Posted by Joe Moreno at 4:52 PM

The San Diego Central Library is one of San Diego's gems and I highly recommend spending some time there reading, working, and checking out all of the great things it has to offer. The spectacular view on the 8th floor, large open space and big tables make working there a true pleasure.