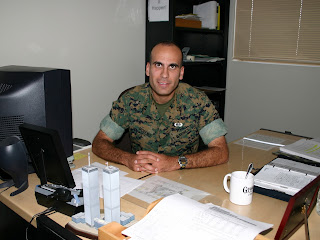 At the top of the list of leadership traits is, "set the example." This was drilled into us at the Naval Academy and in the Marines. While no one is perfect, how often someone sets a proper example is a good indicator of their character. This applies to both good and bad examples.

Every person sets an example that others will follow. Think of it as a meme. It usually happens without us realizing it. This is one reason most of us speed on the highway, even when we're not in a rush. Since most everyone else is speeding, we just follow their example and hope we don't get caught.

Case in Point
One personal example of bad leadership I once set, which could have seriously injured or killed two kids, happened when I went for a run with a friend. We stopped at a red light in a crosswalk of a six lane road with a 55 MPH speed limit and a center divide. We looked to our left and noticed that no traffic was coming so we started to cross with the intention of waiting on the center divide until it was safe to go the rest of the way. Unbeknownst to us, there were two kids, about eight or ten years old, on bicycles, just behind us. As we started to run in the crosswalk against the red light, the two kids followed our lead not knowing that we intended to stop at the center divide. Since they were on bikes, they overtook us and continued beyond the center divide into traffic where a couple cars had to jam on their breaks to avoid hitting the kids. One of those vehicles was a police car. While the kids ended up not being struck, my friend and I received an appropriate tongue lashing from the police officer about setting a bad example which has stuck with me to this day.

Even though I was no longer on active duty in the Marines when crossing that six lane road, I still should have set a good example. Actions will always speak louder than words.
Posted by Joe Moreno at 1:29 PM