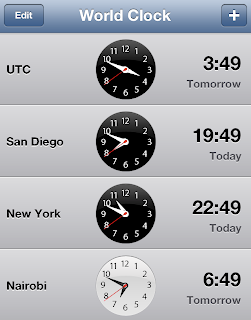 Tomorrow is one of my favorite days of the year as we begin daylight saving time!

(Note of trivia: it's actually "saving" as in we're saving daylight, not "savings" like a savings account. I called into Rich Lederer on A Way with Words, about a decade ago, before Wikipedia was mainstream, to get clarification. Yet, even though I know this, it's still hard as hell to say "saving" instead of "savings.")

Tomorrow will only be 23 hours long as the ground beneath our feet literally changes time zones. Spring is just around the corner! Even in places like San Diego, where tomorrow will have two minutes and three seconds more daylight, it's still a time to celebrate as the days get "longer" even if it's just an illusion. Personally, nothing seems as gloomy as December's days when the sun sets before 5 p.m.

Tomorrow's task will be to set all of our clocks ahead an hour. Actually, most of us will adjust our manual clocks tonight, before going to sleep. However, for our smart clocks, like those in our computers and cell phones, it will happen automagically.

But, just how much magic does it take for computers to figure this out is more than meets the eye since daylight saving time is arbitrary. Even though my 2004 Honda Accord has the ability to set its clock via GPS, I'll still need to manually "spring ahead" because its software hasn't been updated since 2007, when the U.S. changed the beginning and ending dates for daylight saving time.

Over the past 15 years, I've done more than my fair share of coding to deal with date and time calculations. A common bug that I've discovered, on more than one occasion, is when programmers assume that there are 24 hours in a day. For example, to calculate when tomorrow is just add 24 hours to midnight, right? Obviously that's wrong. Add 24 hours to midnight when "falling back" and you'll still be on the same day.

One question that popped in my mind, today, was, why don't we invoke daylight saving time on Saturday mornings instead of Sunday? It seems that we can pick and choose when we want to observe it.

When I was in the Marines, embarked aboard ship and sailing due east or west for days or weeks at a time, we observed timezone changes every other day. In all my experiences while sailing the seven seas we always sprang ahead or fell back at 7 p.m. ship's time. So, when we were traveling to the west, we'd have two 7 p.m.'s (AKA 19:00 military time) which was always a treat as long as you weren't on duty or standing watch during the evening.