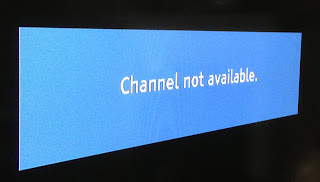 At this very moment, I should be watching March Madness. Instead, I'm blogging because I can't figure out how to operate my former college roommate's TV. There's nothing special about his TV other than the fact that it's not my own and I'm a guest in his house. All TV systems, nowadays, have a learning curve and I am stuck with "Channel not available," because I pressed the wrong button on one of the remote controls.

There's been much speculation about Apple entering the TV set and broadcasting market. Apple doesn't like to enter a new market unless they can put a serious dent in the universe. This was true for the Apple ][, Macintosh, iTunes Store, iPod, iPhone, and iPad. Apple likes to start with nearly 100% market share and then, as competitors copy to keep up, they move into new areas. 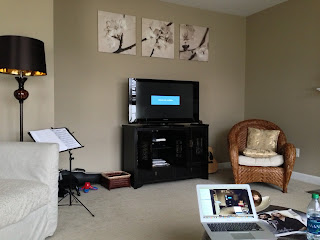 One year ago, I speculated how an Apple TV broadcasting system might work by giving consumers the choice of subscribing only to the stations they wanted instead of paying for package deals. But that's just the broadcasting side of the equation. TVs could use some simplification now that they've become so complex.

After just a couple minutes of fiddling with my buddy's TV I gave up for fear of doing some undoable damage. But, it really shouldn't be this difficult when it comes to turning on and tuning in a TV. There has to be a simple and intuitive way, at least when it comes to the basics.

It took my buddy less than 30 seconds to fix the problem as he remarked, "You got into cable hell since it's not your TV."
Posted by Joe Moreno at 2:25 PM