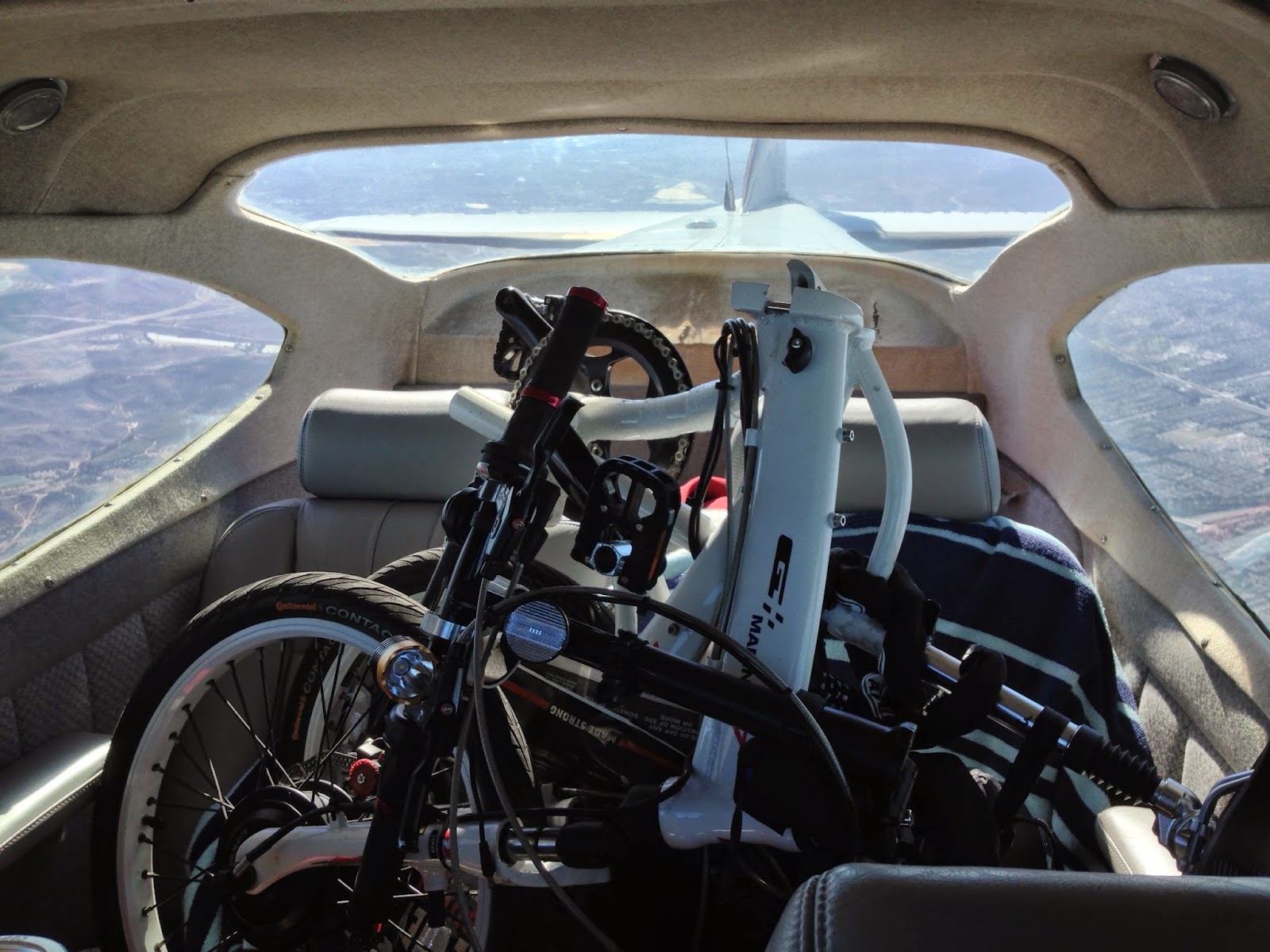 I'd been looking at foldable electric bikes since 2012 and this past July I bought one. My thinking was that I could load it in my plane and use it, instead of renting a car, at my destination. This idea would be a one-bike endeavor, though. Even though my plane can seat four people, it would be difficult to squeeze in more than one bike.

Yesterday, I finally got a chance to try out my transportation mix when I flew up to La Verne to have lunch with my life-long friend, Andy. I told him not to worry about picking me up at the airport. Using my electric bike to cover the four miles from the airport to his house would be a cinch.

It's always a learning experience the first time I try something new. I remembered to pack my helmet and even though the bike has a 25-35 mile range, I packed the battery charger, too, just in case. I even remembered to bring flowers for Andy's wife since they're newlyweds. 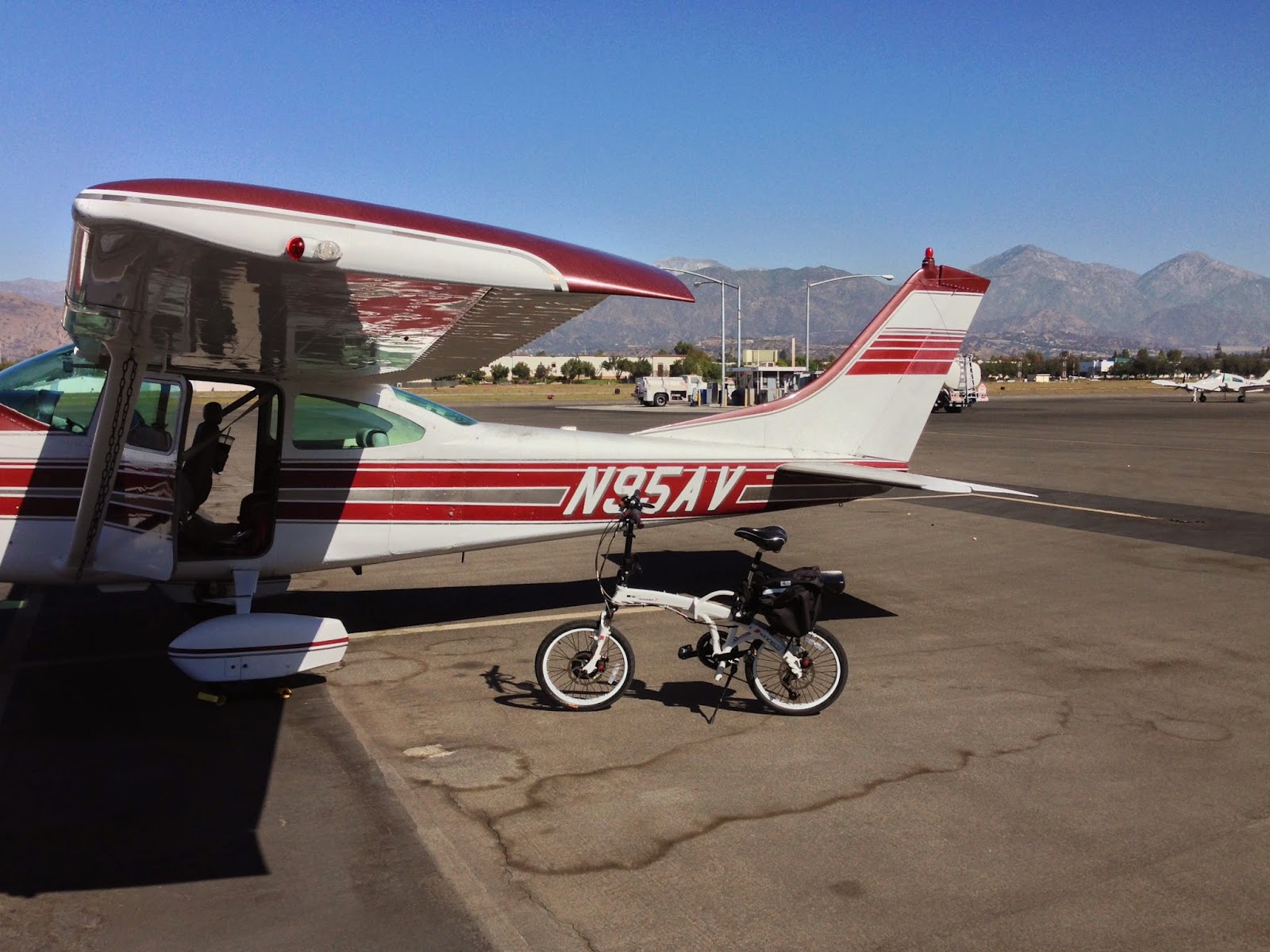 I had to laugh at myself when I landed at the airport, took out the bike and hinged it together. I forgot to bring the key. No ignition key for the bike meant no electric power. Of course, I was too proud to call Andy for a lift so I had to use old fashioned human pedal power.

I don't mind making mistakes and learning from them. But I despise making repeat mistakes. So, to avoid this problem in the future I've placed one of the three keys for the bike in my flight bag. I will certainly never fly without it, again.
Posted by Joe Moreno at 5:16 PM 0 comments 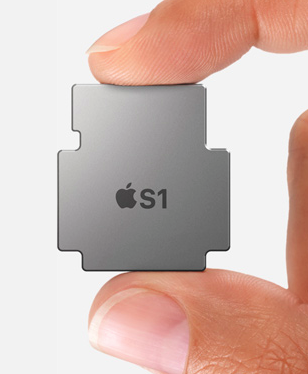 Their conclusion is, since the Apple Watch uses a system on a chip, it could, possibly, be interchangeable. After all, how much can a watch form factor change, over time? Smartphones have been around a decade or so, whereas watches have been with us for centuries.
Posted by Joe Moreno at 10:21 PM 0 comments

The Absolute Best Place to Live


This infographic captures how much Apple has grown. Like Apple, this image is big, so you'll have to click on it to see the details.

Summary:
1. Make sure your devices are compatible.
2. Turn Bluetooth on, on all your devices.

Apple released Yosemite (OS X 10.10), last week, and iOS 8.1 today. Together, with supported hardware, these two OSes enable the Continuity feature-set; one specific feature is Handoff. In a nutshell, these features let you start a task on one device, such as writing an e-mail or document, and pickup where you left off on another. They also allow your phone to handoff phone calls and SMS text messages to your Mac.

It took a little digging to figure out how to coordinate this. Here are the detailed details [sic]:
http://support.apple.com/kb/HT6337

In a nutshell, your devices need to be on the same WiFi network and Bluetooth needs to be turned on for the them to see each other. FaceTime needs to be turned on and logged into the same iCloud account. It seemed that FaceTime didn't realize that example@mac.com, example@me.com, and example@icloud.com were the same account. I had to uncheck the latter two before I could check the "iPhone Cellular Calls" preference in FaceTime on my Mac.

When my first non-iPhone SMS came through, I had to enter a PIN on my Mac that appeared on my iPhone to confirm I had physical access to both devices.

So far, Continuity seems to be working fairly well. 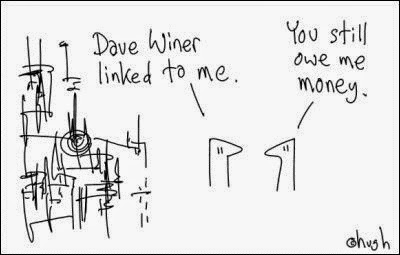 Twenty years ago, today, the father of blogging, Dave Winer, published his first blog post. Back then, it wasn't called a blog or web log. That came later. But its original purpose hasn't changed. Winer, more than anyone else, has preached and practiced that the purpose of blogging is to narrate one's work.

Blogging is fundamentally different than journalism, but there's also an overlap. There's so much of an overlap that Pulitzer awarded the Huffington Post its National Reporting prize in 2012. The prize was awarded for journalism coverage. The coverage was posted on a blog that grew into a news service. News services have blogs and blogs provide news services. Twitter, more than any other company, has seized this opportunity as a micro-blog, news service, and communications platform.

There's both a human and technical element which causes high-tech services to reach the masses. On the technical side, webifying a technology makes it more accessible. Twitter webified RSS, Hotmail webified SMTP, and blogging platforms like Wordpress and Blogger have webified FTP. But it's the human element that's key. These services, plus Podcasts, social media, and comments, etc, allow people to express themselves. It's the very act of expressing ourselves that is our passion. Plus, these webified technologies are truly innovative. Innovation is something that reduces the cost of a transaction. And well designed technology will get out of your way to enhance your productivity.

Without realizing it, we've seen these changes over the past two decades. Adam Curry, a former MTV VJ, once explained to me how he persuaded Winer to solve the Internet video broadcast problem. Fifteen years ago, video didn't stream, it downloaded due to slow bandwidth. It might take five minutes to download a sixty-second news broadcast that was the size of a postage stamp. Winer had no interest in this user experience until Curry suggested "channels." These channels would download news broadcasts in the middle of the night, while you slept. A light went off in Winer's head when he realized that these channels should be RSS feeds with MP3 or video links. This was the birth of the podcast feed format. What's beautiful about this example is that Winer recorded it for the world to see. He didn't document it only because it was a breakthrough, he documented as just another day at the office.

Winer narrates his work on many levels. Sometimes it's on a human level, like his description of how he and Curry came up with the idea for podcasting. Other times, it's on a technical level such as his step-by-step guide, EC2 for Poets, which demonstrates how a non-technical person can get a server up and running within an hour.

Whether you agree or disagree with Winer, don't simply tweet him, "You're wrong." Instead, write a blog post and point him to it. You'll be amazed how much you'll learn in the process. Winer's been wrong many times. And he's been wrong about being wrong. Winer initially said the iPad had too many shortcomings. He was on Facebook, then off Facebook, and now he's back on Facebook because he's realized its potential as a publishing platform. He's not afraid to publicize his thoughts for debate and discussion. If the sign of strength is adaptability, then the sign of intelligence and humility is the ability to recognize when we're wrong. Now go forth and narrate your work.
Posted by Joe Moreno at 1:54 PM 2 comments

As much as we dislike paying taxes, that's the cost of living in a civilized world.

Last week, I heard a piece on NPR about solar power. The teaser was that Pennsylvania regulators are putting a limit on how much power a homeowner can generate with solar panels.

"Why would we want to limit clean energy?" asked Vera Cole, the president of the Mid-Atlantic Renewable Energy Association.

Her question confused me. First, because the her name is Cole, which is, ironically, pronounced exactly like coal on the radio broadcast. And, second, it sounds like she has an obvious point. Her question sounds like someone (big oil) is overtly protecting their turf and power. But the truth is a little more complicated than that.

The bottom line is that Pennsylvania regulators want homeowners to generate no more than 110% of the power they need. The reason is that the excess power generated by homeowners is sold back to the power utility. The power companies aren't equipped to handled consuming power on a large scale. If too many people generate excess electricity then the power utility can't collect enough money to maintain a reliable electricity grid. Imagine if too many people, in too short of a time, generated more electricity than the power company could handle; to the point that the poorest of Pennsylvania homeowners, the ones who couldn't afford solar panels, couldn't afford electricity from the grid?

Utilities are highly regulated. Your local water or power company can't arbitrarily raise prices. They're not as nimble and flexible as, say, a high-tech company.

Cole's question does raise an important point. The power company does need to begin planning for redistributing electricity. Wouldn't be great if power companies became redistributors of electricity from private individuals, instead of coal-buring creators of it?

So, my point about taxes is that governments need to match up funds collected with expenses. This is important as we explore more energy alternatives. Taxes on gasoline are a big portion of the price we pay at the fuel pump. Those taxes go to repairing our roads. What happens when more and more people find alternatives to use fossil fuel powered cars? I'm not suggesting that we should slow the switch from gas to renewable, clean, energy. But, we need to think about alternative sources of tax revenue. I'm actually a fan of big government, but it has to be efficiently run by effective people.
Posted by Joe Moreno at 9:30 AM 0 comments