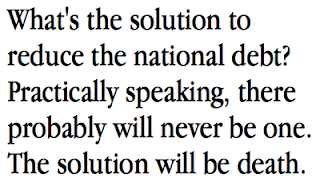 I love big government! Seriously, I do. And I bet that our country's forefathers would love it too.
Just think about everything we have, today, that's paid for by the federal government through our taxes. I'm talking about the really useful stuff. We can drive across town or across the country without paying a penny to the federal government for using their roads – it's already been paid for. (Hmm, is this socialism? Should all roads be toll roads?) Think about potable running water, electricity, air traffic controllers, original funding for the Internet, bridge and building inspectors etc, etc. – I'm talking about our entire county's infrastructure and capacity. These are good things.
What we hate (and I'm speaking for our forefathers, too) is inefficient, ineffective, government waste. Pick your favorite government agency that you love to hate. You don't have to dig too deep to see the "rusty cannon" syndrome: Doesn't work and can't be fired.
Think about the stereotypical federal or state employee who religiously works only 9-5 (actually 8-4) and not a minute more. They're just "putting in time." I've seen this first hand – at 4:03 p.m., they are gone; like lemmings off a cliff. Not all of them, but enough to notice without looking for it. Left behind, after the bureaucrats head out the door, are the contractors. While you might think that the contractors are working late for the money, many are on a 40 hour per week budget. To go over that budget requires prior, written, approval. Long story short, the contractors end up eating their costs, in the short time, to keep their consulting gig in the long term.
When I worked at Apple iServices' iConsulting division, I was on a project at a large federal agency in the D.C. area. One day, at lunch, an Apple coworker of mine, who also happened to be a former Marine, pointed out how dull and depressing it was in the government cafeteria. The atmosphere was the complete opposite of the excitement and electricity we felt at Apple's Cupertino campus cafeteria (Caffe Macs). Keep in mind that I'm not talking about the Apple of today, either. I'm referring to the Apple of ten or twelve years ago when the stock price dropped in half, literally, overnight, during the Dot-com crash and the stock price continued down from there. Those were Apple's dark days, before iTunes, iPod, and the digital hub strategy. That was a time when Apple was 25x smaller than it is today. 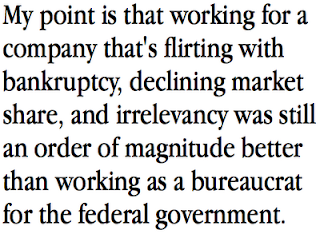 Politicians
Never mind politicians – they're too easy of a target. And, believe it or not, they are some of the smartest people in the context in which they operate. There's just no easy way to win an election in order to get a job in politics, at any level, from municipal through federal. Don't get me wrong – politicians are not blameless – but they really do have to work hard, from time to time – at least to get the job. Keep in mind that they get their job because we, their constituents, gave it to them. If you don't like your duly elected politician then blame your co-constituents.
In the U.S., bigger is better. I've lived off the economy in dirt poor developing countries and seen, first hand, what bad infrastructure and maintenance looks like. In these countries, you can tell the no-bodies from the some-bodies in each village because the person with the most body fat is the leader. More power equals more food. While money is good, food is better. You can't eat money. These developing governments, at all levels, are brittle and, just like the recent Arab unrest we saw earlier this year, it doesn't take much to go from order and rule of law to riots and insecurity.
No American citizen wants to sacrifice any of their own entitlements to reduce the deficit. Boaters would hate a new tax on their boats, pilots would hate to pay user fees at airports, and hard working, salt of the earth, commuters would hate car and gas tax increases. Why not tax the upper class at a proportionally higher rate? Well, that is what we do and the rich can still make a good argument, in their defense, at least in theory.
Solutions?
What's the solution to reduce the national debt? Practically speaking, there probably will never be one. The solution will be death. It's no different than when a person overextends themselves with mortgage and credit card debt. You either generate more income, tighten your belt, or declare bankruptcy. The problem is that, unlike an individual, the U.S. can't get bankruptcy protection and the other two options are just as unlikely.
Throughout history, every singe currency eventually becomes debased. You'd be hard pressed to find a compound interest calculator that can compute how much a dollar would be worth 1,000 years from now at 3.6% interest (the current rate of inflation). The result is so large that it "does not compute." We're literally talking about more money than the world has ever seen. (If you really must know how much a dollar would be worth at 3.6% interest over a thousand years, the answer is $2.3 quadrillion. But we're "only" talking about the "short" quadrillion scale.)
How much is all the money in the world? Around $50 trillion – or 45x less than the compounded interest of $1 a thousand years from now. Could you really see today's U.S. dollar being worth more than 45 times all the money in the world?
Perhaps Bitcoin – or something similar – will replace the U.S. dollar over the next few decades. After all, most countries use a fiat currency and Bitcoin aims to be a currency that's the equivalent of an electronic gold standard. Whatever currency replaces the dollar, hopefully, it will be a peacefully planned transition like the Euro.
My point is that working for a company that's flirting with bankruptcy, declining market share, and relevancy was still an order of magnitude better than working as a bureaucrat for the federal government.
Posted by Joe Moreno at 5:15 PM