Electricity in the Early 20th Century

I love this photo - it was probably taken almost 100 years ago.
(click to enlarge) 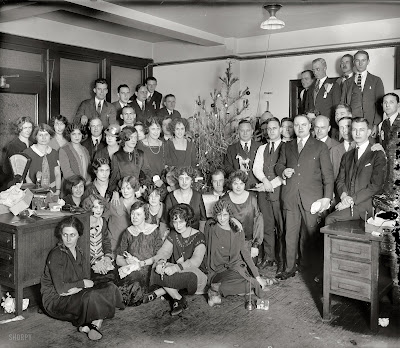 In this photo, you can see the wiring from the Christmas tree running into the light socket hanging from the ceiling.

In the late 19th century, electricity was used almost exclusively for powering incandescent light bulbs. But that changed around the turn of the 20th century. The problem was that offices and homes were only wired for light bulbs. So the light bulb socket was used like we now use a wall socket.

Back then, electrical appliances didn't have on/off switches - you'd just screw it into the ceiling socket. Appliances like electric fans, beginning in 1890, and open top washing machines of 1908 could be fairly dangerous. You can't turn them off and you can't yank out the cord. There are some unpleasant stories of people getting their hair and clothing caught in washing machines.

Innovation and good engineering takes time, no matter how obvious it seems.