What better way to pass the time on jury duty than to blog about it?

I've never served on a civilian jury, but I have participated in courts-martial. In the military, the jury is referred to as the members and the foreperson is called the president. In the summer of 1996 I served as the president of a special court-martial. I had no idea what the case was about until the first witness took the stand and described her consenting sexual encounters, in detail, with the accused who was a Marine sergeant.

Some key differences between a military trial and a civilian trial is that the members (jurors) are allowed to question witnesses after the defense and prosecution are done. To avoid any inappropriate questions the members write them down on a slip of paper which the bailiff passes to the judge for review. If the judge has no concerns then both the defense and the prosecution have a chance to review the question and object before it's asked of the witness. 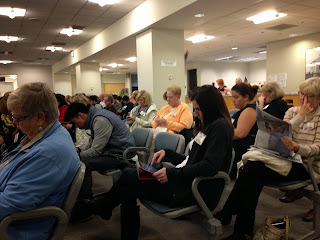 Another key difference about a court-martial was that we, the members, also chose the sentence for the crime. Since we found the sergeant guilty our choices varied from no punishment, other than the guilty verdict, to time in the brig (prison). As the members, we deliberated and voted on each possible punishment starting with the least severe until we had a consensus. We ended up sentencing the sergeant to reduction in rank to corporal and forfeiture of two-thirds of his pay for several months. Realistically, a guilty verdict was a career ender since this conviction would give the sergeant a black mark preventing his reenlistment.

The charges against the sergeant were adultery which is rarely prosecuted unless there's a confession or overwhelming evidence such as a video. Adultery along with sodomy and oral sex are still violations of the Uniform Code of Military Justice. In other words, these acts are crimes for active duty military personnel – even between married partners.

Well, it looks like my name was called for an eight day trial. I'm one of 47 for this trial. Let's see where it goes from here.
Posted by Joe Moreno at 10:14 AM