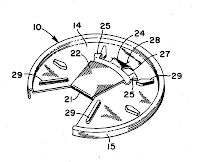 I love great design, especially when it solves a problem in an elegant way. It's even better when the new solution doesn't have any side effects.


It's no secret that I really like my Copco coffee cups. Every morning, an overwhelming majority of adults in the U.S. drink coffee or tea. Since most of us drink it on-the-go, we can't use a traditional ceramic mug while driving to work. The key to drinking coffee on-the-go is to have a well designed lid. And there's no shortage of people who've taken notice of different lid designs.

Before 1990, coffeehouses and cafes weren't common in the U.S., so a lot of the coffee consumed before then wasn't grab-and-go like it is today. Over the past twenty years, the to-go coffee cup has evolved.

Originally, the to-go coffee cup included a simple lid that had to be removed in order to drink the coffee. Then a perforated tab was added to the lid so that you could open up a drink hole. The problem with the tab was that, once it was opened, it couldn't be resealed since the perforation was broken. Like most any other problem, over time, a better solution was engineered. About 15 years ago, I made a couple trips to Singapore where I discovered the innovative way that the locals carried their coffee: in a bag. Initially, I couldn't figure out what these bags were until I saw my driver buy a "cup" (bag) of coffee and hang it on the radio knob in his car. Pure genius. As he turned corners, nothing spilled and he could simply lift it up by its string and drink it through a straw sticking out of the side of the bag.

In the mid-1990s, I lived in an apartment that was formerly the Hotel San Clemente. It had (and still has) a cafe in the lobby that opens up into a courtyard. Needless to say, I drank a lot of coffee at this, my favorite, cafe. Nearly every day, I'd stop by, on my way out, and get a cup of their chocolate almond raspberry coffee.

In 1994, the lobby cafe provided simple coffee cup lids with the perforated tab which would leak as the coffee splashed around in the cup. To solve this problem, I'd always use two lids with the tabs opposite each other. While this nearly solved the problem, it wasn't possible to drink the coffee until I got to work.

About a year or two later, the owner began providing coffee cup lids that were designed like the ones now used at Starbucks. Since the hole in these lids is raised, it prevents most of the coffee from splashing out unless you just happen to rattle the cup the wrong way. Best of all, you can drink and drive without any spillage.

Kenya
When my wife and I lived in Kenya, we coined the term, "Kenyan full," which means filled to the very top. For some reason, bottles of water, cups of coffee, etc, in Kenya, were filled to the tippy top. I'm guessing that it's the equivalent of a baker's dozen. The problem with a cup of coffee that's filled to the brim, even with today's "Starbucks" lid design, is there's very little chance that your coffee won't spill out – it's just too full. But, the Kenyan's had a simple solution to this problem: masking tape. After they snapped the lid on your cup of coffee, they'd stick a half inch piece of narrow masking tape over the drinking hole to keep it from leaking. Hopefully, the masking tape glue wasn't unhealthy - but, regardless, you couldn't easily drink your coffee and then reapply the masking tape while you drove.

Dunkin' Donuts: The 100% Solution
In 2004, I noticed that Dunkin' Donuts had a 100% solution to this problem which matched my personal requirements for what a coffee cup lid should be. Simply put, Dunkin' Donuts provided a lid, similar to the Starbuck design, which had a flap that plugged the drinking hole in order to keep the coffee from splashing out. When you want to take a sip, you'd simply flip the flap up and it would snap into place on the opposite of the cup. After taking a sip, you could replug the drinking hole. A perfect solution without any side effects. 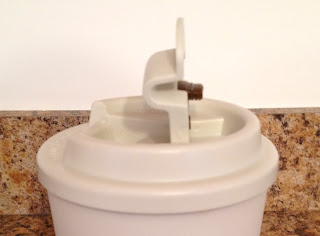 Today, I was at Bed, Bath, and Beyond (where I bought my first Copco cup in 2009) and I noticed that they were selling Copco cups with newly designed lids. It attempts to mimic the Dunkin' Donuts lid, but it has two small side effects that I don't care for.

First is the fact that they've raised the lip of the cup in such a way that you can't form a complete seal, with your lips, around the drinking hole. This just doesn't feel natural when drinking and it presents a risk where coffee can leak out while drinking.

Second is the fact that the rubber plug is too close to the center of the cup when it's in the open position and it interferes with your nose. This means, since the rubber plug will be wet with coffee, that the tip of your nose ends up getting coffee on it.

However, I have to say that I'm impressed with the seal that the plug forms. Not only does it seal the drinking hole, but it also plugs the air hole in such a way that, when fully secured, you could throw the cup, full of coffee, up in the air, while spinning it, and not a drop will leak out.

Taking it for a Test Drive
I'll give my new cup a try this week. I think I'm going to really like the fact that it won't splash on me as I get into and out of my car – a problem that ends up spilling coffee on my hand about once every week or two as I juggle my keys, lunch, and iPad while getting into and out of my car.

problem is that they no longer sell that flip top lid for the copco mugs! I loved that lid. if you know where to get it please contact me.

The problem is that they no longer make the flip top lids for the copco mugs! I loved mine until it broke. If you know where I can get some please let me know.