On Thursday, I drove up to French Valley airport, in Temecula, and flew back home to Carlsbad. While the drive takes about 45 minutes without traffic, the flight is about 15 minutes. The only problem with flying back to Carlsbad was that my car was still at the airport in Temecula.

I considered a couple options to get back to my car including paying for a taxi or a one way car rental. The taxi option would have cost about $120 which made it an easy decision to say, "No, thanks."

A one way car rental could have been a good option if the stars lined up correctly. Some car rental companies charge less than $30/day - the problem was finding one in Carlsbad and and another one Temecula. While I did find a car rental for about $40/day, they told me that they'd add at least another $40 for the one way rental.

Enter Craigslist
After almost giving up, I ran a search on Craigslist and discovered that someone had posted an ad asking for a ride from the San Francisco airport to Palo Alto. While I've never bought or sold anything through Craigslist, I was well aware of how closely people watch it so I posted my ad.

Instant Gratification
I posted the ad at 12:51. Within 11 minutes I had one e-mail and one voice mail from two different people. I called back one of the "bidders", Anthony, who said that this job would help him make ends meet until he received some college money that he was expecting next week. I gave him the address and we set the pickup time for 2 p.m.

I was wondering what he meant when he said that he was expecting some money for college. Two things popped to mind. At first, it sounded like he was expecting money back from the G.I. Bill since the VA pays you back once you've completed a class. I quickly dismissed that remote possibility for a more likely scenario which was that he was waiting for a check from mom and dad.

At 1:55 p.m., he called me to let me know that he had arrived. I walked across the street to the school wondering what my ride to Temecula would be like. 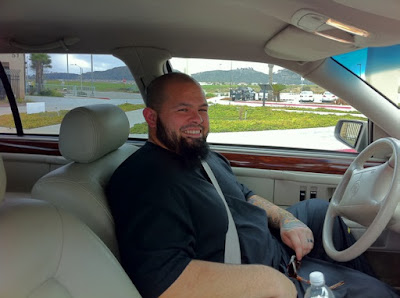 It turns out that Anthony is a former Southern California gangbanger who joined the military. After getting out of the military, a few years ago, he became a born again Christian and began using his G.I. Bill to study theology at a local Christian college.

Military Connection
Since we were both in the armed forces, we had a lot to talk about on our drive. I was impressed with Anthony's military background. He served in Coast Guard from 2002-2006 in their security forces unit which is used for both boarding and securing ships at sea as well as counter-terrorism.

He also knew his Coast Guard history. When I mentioned that the last time I was on a Coast Guard ship was the USCGC Munro in West Africa (Djibouti) he told me that that ship is named after the Coast Guard's only person to be awarded the Medal of Honor. While I knew that, since the ship's captain told us the history of the ship during my visit, what I did not know, which Anthony went on to explain, was that Douglas Munro was posthumously awarded the Medal of Honor for rescuing Marines during the Guadalcanal campaign in WW II.

Finances
While Antony never complained about not having money, I could tell things were tight for him and his wife and kids when we got off the highway and he asked for some of the money, a few miles before the airport, to pay for gas. I felt bad for this guy who had obviously turned his life around. He was now on the straight and narrow to the point that he wouldn't even say "Hell" when he told me, "The Navy guys used to give us heck."

As we pulled up to the airport, he told me that, when he was in high school, he went on a tiger cruise with his father who was in the Navy. A tiger cruise is usually the last week of a six month deployment when the ship picks up civilian dependents so they can get a taste of life aboard a Navy ship. It turns out that his tiger cruise was on the U.S.S. Boxer in 1997 which is the same ship and deployment I was on.

When he dropped me off I couldn't help but give him an extra $20 for the company and conversation.
Posted by Joe Moreno at 9:10 AM