Today, I had a first hand experience with citizen journalism. I think of it as pro-am journalism where both a professional and amateur report the news.

This morning, when driving from Carlsbad to San Clemente, I was stuck in gridlock on I-5 ("the Five"), northbound, which was backed up for more than a dozen miles at the Las Pulgas exit of the Marine Corp base at Camp Pendleton. Since this 17 mile section of the Five passes through a military base, there are no public detours between the two towns that border on Camp Pendleton's north and south sides. But, fortunately for me, I still have a military sticker on my car which let me cut through Camp Pendleton to avoid the traffic.

After cutting through Camp Pendleton I was headed back onto the Five at Las Pulgas, via a service road, when I passed the wreck which caused the accident. I made a U-turn and parked next to the truck to snap these photos in the parking lot where the flatbed truck was parked. 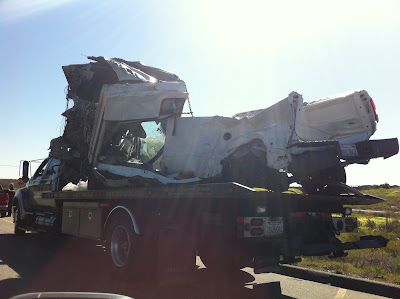 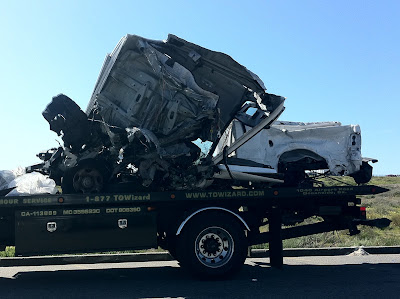 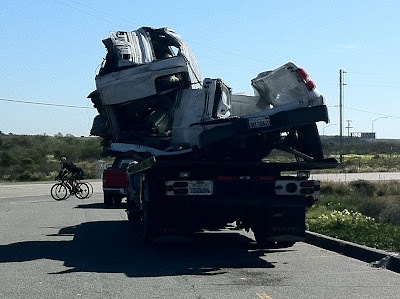 After taking these photos, I stopped at a tea shop in San Clemente, a few minutes later, and posted one photo to Twitter. Immediately, a reporter from the North County Times saw my photo and tweeted me to ask if she could use it to accompany an article about the accident.


@JoeMoreno Do you mind if I use that photo on the NCT website? We have a story up, but no art.less than a minute ago via TweetDeck

I told her that I has several photos which I sent to her.


@AssignmentDesk1 Sure. Feel free to use that accident photo. I have several other photos that I can email to you if you'd like.less than a minute ago via Twitter for iPhone

She ended up using two of my photos in the article about the accident. 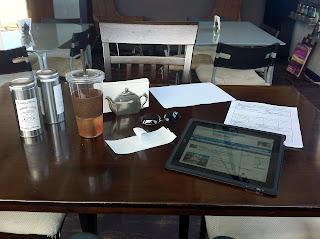 I was telling the tea shop owner about the accident and gridlock as I was tweeting with the reporter and sending her my photos. The shop owner casually mentioned that, earlier this morning, as he headed from his home in Carlsbad to his shop in San Clemente, he was passed by a white pickup truck driving the wrong way on the Five which kicked up rocks into his windshield. I was stunned! The tea shop owner drove right past the pickup truck just before it caused the four-vehicle pileup.
Posted by Joe Moreno at 10:19 PM