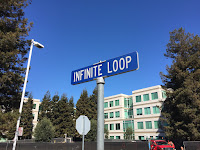 Last weekend, the new Apple Store at 1 Infinite Loop reopened, after being closed for remodeling for a few months, and I had a chance to visit it during its opening week.

If memory serves, at the end of the last century, this store was called the Apple Store. After 2001, it was renamed The Company Store since it was unique in the truest sense of the word. Now, it's been rechristened, once again, as the Apple Store, manned by Apple retail employees who comprise 50% of Apple's 110,000+ workforce.

What makes the store at 1 Infinite Loop (called IL1 by Apple employees) unique is it's the only store that sells Apple logoware such as t-shirts, coffee cups, water bottles, pens, etc. I suspect that it's the only Apple Store without a Genius Bar, too.

See the video of the inside of the new Apple Store at IL1, below or, even better, checkout the raw super-high resolution HD video.