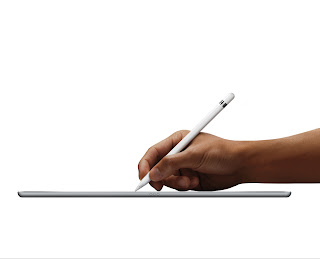 Yes, when the iPhone was introduced by Steve Jobs, in 2007, he panned the stylus since the iPhone used a touchscreen. Now, Apple's announced the Apple Pencil which is a stylus for the iPad Pro, seemingly reversing Steve's original convictions, and some news sites are harping on that.

There are two points to take note of. First, Steve's changed his stance (publicly) on other features Apple shipped. For example, he pointed out that no one wanted to watch video on a tiny iPod Classic screen, and then he allowed video playback in a future iPod.

My second point is more salient in that, early PDAs required a stylus just as today's computers require a mouse or trackpad. And, now, just as a creative person would buy a Wacom pen tablet, so will they buy an Apple Pencil. Optional, yet empowering.

What did I think of the rest of today's keynote?
Posted by Joe Moreno at 2:34 PM