Apple Rant™ – The Failure of Technology 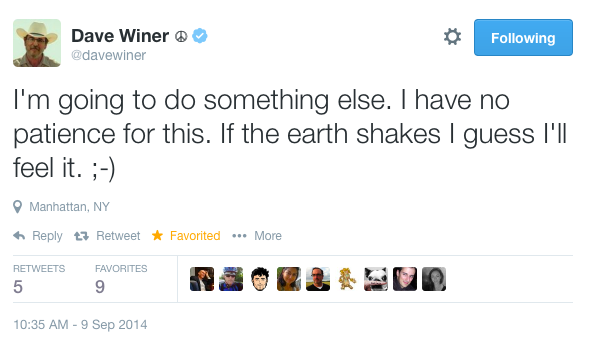 The most anticipated Apple keynote since the iPhone, announcing the Apple Watch, was an abortion. From an inaccessible live feed to 45 minutes of listening to an Asian translator is not the best possible customer experience.

Here's a key problem with the Apple Watch: it doesn't replace anything – rather, it adds. It adds another device to manage thereby adding complexity to my life. The iPhone replaced my cell phone, iPod, and, to a certain degree, my computer when it came to e-mail and surfing the web. Nowadays, when I travel on business, I feel it necessary to bring my iPhone, MacBook Air, and iPad. Six months from now, will I need to bring a fourth item, too? Sure, this is great for the Apple investor; but I want to simplify my life. We all do.

On top of this, I'm a bit frustrated after spending half an hour failing to download the new U2 album. Then I spent ten minutes figuring out how to submit a support request about the U2 album because the web form had a bug. 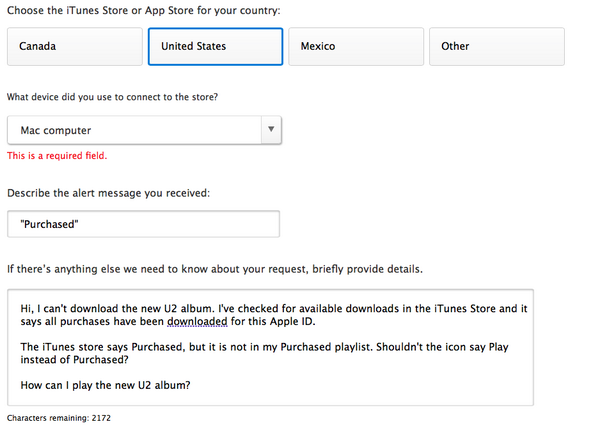 Forty years ago, when we changed the channel on our TV, the new station tuned in instantly. I'm at a loss, when explaining to my mother, why using an app has a lag, especially when network connectivity isn't a factor. What good are billions of cycles of CPU power that make me wait. I shouldn't have to wait longer and longer due to launching, buffering, syncing, I/O and latency.

My 500 GB MacBook Air hard drive is full. Each time it drops below 10 GB I have to find something else to delete. You'd think 7 GB sounds like a lot of space. But, after a day or so it dwindles down to a few hundred megabytes and OS X becomes unusable until I reboot. Am I really expected to delete my personal photos?

Why is Siri worse today than in 2011? Or perhaps it is the same, but the novelty has worn off? Why did my Time Capsule wireless base station freeze, requiring a restart, resulting in this iOS Note being duplicated multiple times?

Here's the kicker, Apple solves these First World grievances of mine better than any other company. Yet I am more and more frustrated. Technology must move out of the way to enhance our lives, not complicate it.

Technology is alive and it's not just getting a cold, it's getting cancer. As a consumer, I want to live my life and focus on my passions, not my technology. As a software engineer, I'll deal with all the technical headaches, but I won't tolerate it as a consumer. Technology seems to be failing us faster than it's helping us.

Obviously, I've reconsidered some things I've said in the previous 24 hours. Dave's right, Apple Pay is the big deal. Or, technology that's embedded in my body, as he suggested, would be very interesting.

The same comment you make about Apple Watch can be made of the iPad, yet Apple has sold millions of them.

Very true, Frank.
But I can replace my laptop with my iPad for most tasks. The iPad can stand alone. However, one cannot use an Apple Watch without an iPhone.

Isn't a watch just a fashion extension for the phone? I don't think it's supposed to replace anything. It's digital jewelry.

I agree with Joe and Todd. If they remain as just smartphone accessories, they are going to have limited use. They need to accessorize more things. Some more here: http://stories.frankmcpherson.net/2014/09/10/smartwatchesIntegrateWithTooFewDevices.html

One originally couldn't use an iPhone without iTunes but (many iterations later) now it's possible to register, back up, restore, install software and such directly from the iPhone; a mac/pc connection is entirely optional. It is *easier* when starting out to let a new device rely on older devices for some functionality - Palm proved that - but that's only a transitional issue.

Assuming the iWatch succeeds and apple keeps iterating on it it seems likely it'll eventually work (for some) as a completely standalone device, replacing everything else. Why wouldn't it? If it doesn't meet a real need for you yet, "early adopter" isn't your gig; just stay on the sidelines a while and see what develops.

Glen, I agree with you 100%. I think a similar analogy would be the iPod which was tethered to a computer to get up and running – same premise. It's probably only a matter of time until the Apple Watch becomes a stand-alone device. The true test will come when we, the customer, get our hands on it.