One thing that gets me excited is elegant customer service which I've blogged about many times.

One thing that bums me out is the lack of dry cleaners in my neighborhood. There is not a single one near the southeast tip of Balboa Park which means I have to go downtown – not convenient or cheap.

After reading several reviews on Yelp, one dry cleaner floated to the top: Adamo. Customers spoke of the superb service from the proprietor, Mrs. Lee. But, the challenge with this cleaner is it's in a busy area of downtown so parking is difficult.

When I told Mrs. Lee that it was my first time she gave me a discount when I paid at drop off. She pointed out that it's hard to park on the street and she recommended that I call her from the curb and she'd bring out my dry cleaning. 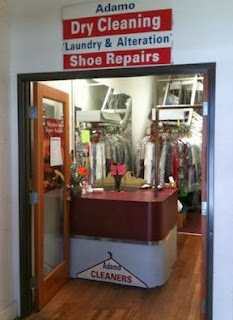 As I rolled up to retrieve my dry cleaning there was a Budweiser truck double parked while the driver was unloading beer directly in front of Adamo so I pulled in behind the truck and called Mrs. Lee.

"Mrs. Lee, my name is Joe Moreno. I have some dry cleaning to pickup and I'm out front behind the Budweiser truck...," I said.

She interrupted, "Oh, your stuff is here and it's all done."

"Do you need my ticket number?" I asked.

"No, I'll bring it out to you in just a minute," she answered.

Less than 60 seconds later I saw Mrs. Lee walk out of the store with my dry cleaning. As she handed it to me she pointed out that she was careful not to iron the seersucker shirt. A point I made to her when dropping it off. She also showed me where my ties were hanging too. The entire handoff took less than ten seconds.

It's impressive that she remembered not only my order, simply by name, but also the details. Everyone loves to be treated well, no matter what we're paying.
Posted by Joe Moreno at 11:52 AM

Nice story, who wouldn't want to be treated like that?, Mrs Lee is awesome.