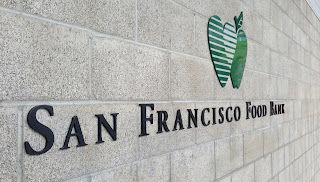 Last weekend, I went to San Francisco to watch the Kraft Fight Hunger Bowl  which seemed like an odd name for a bowl game. Probably because most bowl games in the old days (say, 80 years ago) were named after nouns (Rose, Sugar, Orange, Sun, Cotton, etc). Then they were named for sponsors (Meineke, Little Caesars, Outback, etc). Yet the Kraft Fight Hunger Bowl still seemed a little unusual since it's not just a brand name but it's also a call to action. And a good call to action it is. 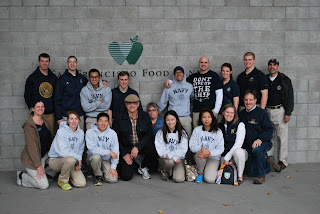 We spent the afternoon packing apples. A "ton" of apples. Actually, we packed nearly twelve tons. The apples were delivered to the food bank in large boxes which we sorted out (the good from the bad) into thirty pound boxes. These apples were supposedly less than ideal from large grocery stores but I have to admit that they were in great shape. I personally packed more than a thousand individual apples and only rejected about half a dozen. 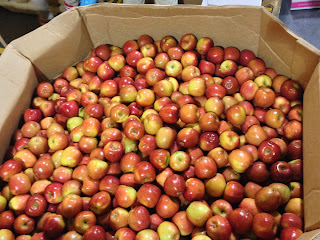 Each year approximately 130,000 volunteer hours are donated to the food bank which is the equivalent of about 55 staff members. The thirty pound boxes that we packed would go from our hands into people's stomachs in about 48 – 72 hours.

Most of us were volunteers along with some high school students who received class credit. Last, but not least, were some scofflaws doing their community service to work off their unpaid parking tickets – they were easy to spot since they seemed the least thrilled to be there.

I'd love to do this volunteering again. It's definitely not backbreaking work yet it still makes a difference.
Posted by Joe Moreno at 8:38 PM