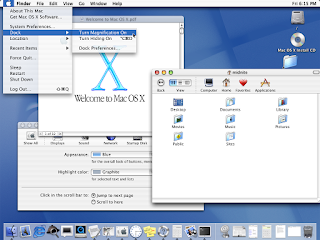 There was some discussion, yesterday, asking: What's the most beautiful software?

Most of the answers were front-end consumer or knowledge worker systems such as the original Macintosh or VisiCalc. One thing that these systems all had in common is they were revolutionary end-user solutions that you could see or touch, which got me thinking: What about software you can't see?

As a software developer, I'm partial to some middleware systems. My personal favorite is Enterprise Objects Framework (EOF), but it's very abstract, making it hard to convey its importance as one of the first database-to-object-oriented mapping systems.

Two better examples of software that you can't see or touch, which relates to consumers, are Carbon and Rosetta. These two pieces of software effectively breathe new life into Apple in 1997 and 2005, respectively.

Carbon
Carbon allowed software that was written for the original Macintosh OS (sometimes referred to as Blue Box or Classic) to be compatible with Apple's new operating system, Mac OS X. Developers only needed to recompile their Classic app under Carbon and it would run, natively, on Mac OS X with minimal tweaks. Software that was no longer supported and not recompiled under Carbon would still work, nearly seamlessly in Mac OS X, by launching Classic which was, effectively, the virtualization of one OS (Classic) within another OS (Mac OS X). An elegant solution.

If you were a Mac developer and you wanted to survive the turn of the 21st Century then you'd recompile your apps under Carbon. Hence, "all life is based on Carbon."

Rosetta
While Carbon allowed developers to transition from Mac OS 9 (Classic) to Mac OS X (Unix), Rosetta allowed developers to transition from a PowerPC (PPC) hardware architecture to an Intel CPU. Steve Jobs gave a brilliant keynote during the 2005 WWDC by failing to mention, throughout the first half of his presentation, that he had been running his demos on an Intel based Macintosh until he finally said, "We've been running on an Intel system all morning."

Rosetta was Apple's solution that allowed PPC binaries (executable applications) to run seamlessly on Intel based Macs. What made this software so beautiful was that it was undetectable to users when Rosetta was running. Switching to Intel not only reduced power consumption, which was key, but it also allowed Windows to run either natively or virtualized, instead of emulated, on Apple's Macs.


And, in case you're wondering, my favorite software nowadays is ForeFlight for the iPad which has revolutionized cockpit resource management (CRM) for the single pilot.

Author: Joe Moreno
Posted by Joe Moreno at 12:44 AM