Wireless networks and crowds do not mix well. 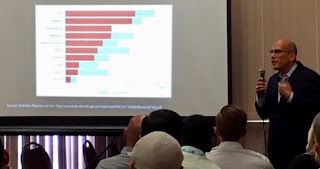 One thing I learned to appreciate at The Basic School was the importance of rehearsals. In theory, there's no difference between theory and practice. In practice, there is. So there's no better sample or simulation than actually "doing it."

I give several Keynote presentations each month. Even when I'm giving my presentation at a tried and true venue, I still like to be set up and ready to go at least 30 – 45 minutes before the audience arrives. Instead of using a Bluetooth remote, to advance my slides, I use the Keynote app, on my iPhone. The Keynote app not only controls my slides, but it also displays the current slide that's being presented. Additionally, the Keynote app controls my Keynote presentation using WiFi, instead of Bluetooth (or infrared), which gives it a much longer reach since WiFi can be relayed.

Last month, when I presented at San Diego Startup Week (SDSW), I setup my laptop more than an hour early since I would be presenting on the morning of the first day of the conference. When I arrived, the A/V was still being set up and tweaked. But it all quickly came together as I ran through my presentation testing the audio and room lighting. I was confident and ready to go when the masses arrived.

Whenever large groups of people gather, get ready for something unexpected to happen. And that's exactly what happened. I probably should have realized that, when you get hundreds or thousands or people on the same network, it slows to a crawl. In my case, the problem was the WiFi LAN (not the Internet connection) that was overloaded. The WiFi was provided by a wireless router in my presentation room and it was overloaded. So much so that the signal couldn't travel from my iPhone's Keynote app, 20 feet to the WiFi router, and then to my laptop. In foresight, that was unexpected, yet completely expected in hindsight, if I had given it some thought. While I was able to successfully give my presentation with my Keynote app, it was touchy. I never saw any of my slides displayed on my iPhone and it would take a couple taps, followed by a long delay, to advance my slides. Clearly, that's not a distraction I want when presenting.

Last night, I brought up this issue at our SDSW postmortem. The best solution I heard was the recommendation to have a private WiFi network for staff and presenters. I'm sure we'll push for that, next year, if there are enough WiFi channels available to support it.

Event best-laid plans of mice and men can go awry.
Posted by Joe Moreno at 2:41 PM