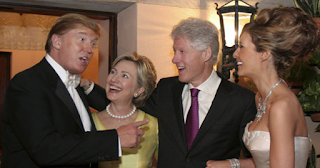 I once served on the board of a non-profit with nearly 30 voting directors. When I joined the board, one of the directors told me, "The board always votes with the chair."

By no means was my fellow trustee telling me that I needed to vote with the chair; rather, he was telling me that enough of the board backed the chair that his will was the de facto outcome. Turns out he was right. It wasn't a conspiracy, it's simply the way of the world.

If I know you and you run for a highly visible political office then I'll probably vote for you. Because I know you, that gives me access to you. This is why G.W. Bush won the Republican nomination over McCain in 2000. G.W. Bush shows up with access to his father's political connections thereby making it easier to push forward the Republican's agenda.

But, access isn't always enough. If it were, then Hillary Clinton would have won the 2008 Democratic nomination over a freshman senator. Even a woman, with more experience in federal politics, was no match for a man in the eyes of the the American public. (Don't forget that black men won the right to vote decades before white women, in America.)

Similar to Schwarzenegger, the key thing that makes Trump stand out is his celebrity. As a New Yorker, I've heard about Trump since the mid-1980s; and the rest of America has known him for at least a decade. He's been a common sight in our living room since the turn of the century; far more often than Clinton – and as much as people blame the rich, we all want to be rich.

So, using this logic, it would seem that Trump will be the next president of the United States.
Posted by Joe Moreno at 3:33 PM