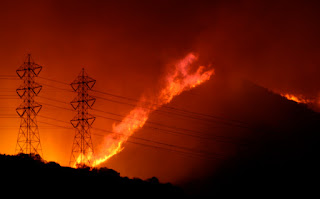 A fire was started and now gasoline has been thrown on it. Why did I not say anything about the original fire? That is a question I'm afraid to answer because I might not like what I find out about myself.

How do we make this better? For starters, by not making matters worse. Be cautious about inadvertently fanning the flames. Fear, hate, and blame spread like wildfire. It's one thing to be disgusted, it's another thing to take positive, constructive action to better the situation for all involved. Hashtags help very little compared to critical thinking and peaceful action. We should be saddened and angry about the past, but we can't change it. (Easier said than done, but I’d rather live in a state of peace than unending war.)

I recall a lesson from General Colin Powell, when he was Chairman of the Joint Chiefs of Staff, as he addressed us at the Naval Academy, "Get pissed, then get over it." Now make a better future. You have more power, control, and influence than you realize; use it wisely.

Update: After an healthy discussion with a black Academy classmate, he pointed out that "Get pissed, then get over it," is a bit too flippant when dealing with death. His suggestion makes more sense, "Get angry and do something about it," explicitly pointing out that the something should be non-violent.