What's the secret to telling a great story? It depends on a lot of things. Mostly, though, it's important to know your audience. The topic of your story doesn't even have to be interesting, rather, how you tell a story is key. A little levity and drama is helpful, when appropriate. Great storytellers have a way to pull in their audience without shutting them out; and the latter part is key – think about great mysteries with surprise endings.

A few years ago, I began writing fiction. I simply sat down at my computer and wrote a few short stories. And I made some classic mistakes, such as beginning a story with weather and writing the cliche story about a divorced woman and a sick dog.

I had no idea if my storytelling was good, so I went to a professional, Joyce Maynard. Joyce's biography always begins with the fact that she wrote her first book while living with the author of The Catcher in the Rye, J.D. Salinger. What adds to the allure of this tale is that, at the time, Joyce was 19 years old and Salinger was 53. But it was truly the high quality of her writing that got the attention of Salinger when, at 18, her article, "An 18-Year-Old Looks Back On Life" was the cover story of The New York Times Magazine in 1972. A key thing I learned from Joyce is that the story behind the story can be more interesting than the story, itself, since it's more exciting to show people what's going on behind the curtain. 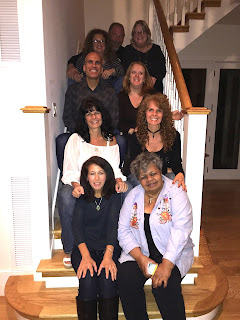 Even more important is the storytelling technique of summarization that I learned from my sixth grade teacher, Ms. Cooke.

Last weekend, I had a chance to spend a couple days with Ms. Cooke – something I hadn't done for five years – and it was highly enthralling.

I, along with several other 6th grade classmates, still connect with Ms. Cooke because she had (and still has) a strong presence in our lives. She cared about us as students and she was a great storyteller. She's a smart, independent person who neither tolerates fools nor stupidity. As a teacher, she wanted to teach her students not only book smarts, but also key lessons in life. The quintessential "teach a person to fish" by showing us critical thinking skills.

After more than 30 years in the classroom she retired and opened The Cooke's In restaurant for more than a dozen years. Shortly after retiring from her restaurant, in 2009, I spent a couple days at her house scanning school photos covering three decades, followed by a mini 6th grade reunion where we got to hear more of her stories.

Fast forward to two weeks ago, the night before my 30th high school reunion, when about half a dozen of us from my 6th grade class descended on a classmate's house in Amagansett, NY, in the Hamptons, for a couple days of reminiscing. Of course, Ms. Cooke joined us and prepared her spectacular jerk chicken.

While listening to her speak, I learned another key storytelling secret: keep your story short and to the point. As we hung out in the kitchen and spoke about how good her food was Ms. Cooke said, "You know that the secret is to running a restaurant? Expediting."

Do you see what she did there? She summarized her entire story – a story she had yet to tell – in a single word that drew us all in.

She told us that running a restaurant is about coming up with a recipe and being able to make it the exact same way, every time, and to do that quickly. She told us the obvious, but it carries more weight when spoken by the voice of experience. She told us just enough to pull in our attention and then she answered our question without waste of time or words. We speak about "active writing," but active talking is equally important since it's a key essence of storytelling, regardless if it's fact, fiction or marketing.