Up and Running with Watch

Yesterday was my first full day with my Apple Watch. My first foray into wearable technology was 20 years ago when I purchased a Polar heart rate monitor in June 1994. Since then, on nearly every run, from training, to 5Ks and 50Ks, I have worn a heart rate monitor. But the Apple Watch is my first experience with a consumer wearable high tech device designed for daily use.

A buddy purchased an Apple Watch Sport, and, when I told him I had ordered a Space Black Apple Watch, he said, "The internals are all the same. The only difference is the casing, band and crystal." A good point. In other words, this device is more fashion than technology; just like a car.

Unbox and On Wrist

When my Apple Watch arrived, I recorded the unboxing and then played around with my new toy for a couple hours. The fit and finish is exquisite. I also ordered three bands (leather, Sport, and Milanese). The traditional wrist watch has been around for more than a century, yet it took Apple to design a simple way to swap and adjust bands. You can see, in my unboxing video, that my Apple Watch bracelet was too big and needed resizing. Instead of bringing it to a jeweler to adjust my band, I did it myself. It only took a couple minutes to pop out links from the bracelet, with my fingernail, until it was a perfect fit. Swapping out bands is even faster – simply make sure that the three rubber shims are facing up as you slide on a new band and you'll have no problem.

Yesterday morning I walked to breakfast with my Apple Watch while listening to a podcast. The Apple Watch Workout app performed beautifully while tracking my heart rate during my mile and a half walk. The app lets you set a specific goal for running, walking, cycling, etc. The goals can be set for time, distance, calories, or left open with no specific goal.

In the afternoon, I took my Apple Watch for a run. During my one mile warm up run I didn't use the Workout app. I was a little concerned when I tried measuring my heart rate while warming up because it took 10 to 20 seconds to measure it. Looking down at my watch for that long, while running, seemed worse than texting while driving.

Once I was done stretching, I activated the Workout app and my heart rate measuring concerns melted away. The Workout app continuously reported my heart rate. Measuring your heart rate is the key to knowing your personal exertion levels during endurance sports. You don't want to be anaerobic if you're running a marathon because you'll bonk. On short runs, you don't want to run too slow and miss out on maximizing your training. Noticing that your heart rate is higher than normal while running at a slow pace could indicate something. Perhaps you're coming down with a cold or you haven't recovered from a previous workout.

The allure of wearable technology is that it physically incorporates you into its system. It's a part of you and you're a part of it. 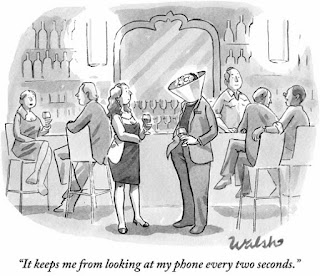 I usually wear a traditional watch so I might as well wear one that ties in with my iPhone. Since I've only been using my Apple Watch for a couple days I still have a lot to discover. For simplicity sake, the small size of the Apple Watch necessitates limited UI interactions, so it takes a little getting used to. But, it's very handy to answer phone calls and respond to text messages without needing to carry around my phone. However, it is, yet, another device I need to have with me. And it needs to be tethered to an iPhone to use all of its features.

Time will tell, but so far it's definitely an asset. I'm pulling my phone out of my pocket far fewer times throughout the day without missing alerts, e-mails, and messages.