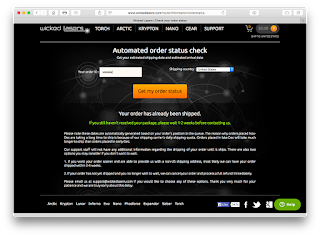 I think I've encountered the perfect online scam; or, at least I can now envision how it would work.

Over the past ten years, I've blogged a few times about my experiences in junior high school with lasers and holography. A few years ago, I read about Wicked Lasers on TechCrunch. The diode lasers they sell are spectacularly powerful – more than a thousand times more powerful than the helium neon lasers I used to make holograms in my basement as a kid. A few years ago, I began to place an order for a Wicked Laser but I stopped myself from hitting submit when I saw that the company was based in Hong Kong.

Last December, I saw that Wicked Lasers was going to stop shipping to the U.S. after the New Year, so I placed an order for a discounted laser of $375. After all, TechCrunch reported on them multiple times.

The gotcha that I'm seeing more and more often is that companies charge your credit card as soon as you place your order and then ship their product more than a month later. When this happens, the consumer's best avenue of recourse is to ask their credit card company to run a chargeback within 60 days if they think they're being scammed. I have yet to run a charge back for any purchase I've made, but I am seriously considering it in the future. I've most recently seen delayed shipping from Nanoleaf and Stack Social. Nanoleaf delivered my product on the 60th day and Stack Social has been replying with delayed shipping dates, but I'm still within my 60 day window.

What makes Wicked Lasers the model for online scams is that their customers will accept a two month delay since the product is coming from Hong Kong. During that time, Wicked Laser missed a few shipping dates, but their customer service team was responsive via phone and e-mail. Now, they no longer answer their phones, but their e-mail team is still responsive. Yet something is amiss. Wicked Laser's e-mail replies are written in excellent English, but vague enough to seem like a fortune cookie message or horoscope. Each response, in a vacuum, seems like it was addressed to me, or at least that's what I wanted to believe:

One month after ordering:
"Our support staff will not have any additional information regarding the shipping of your order until it ships. If you no longer want your order, we can cancel your order and process a full refund immediately."

Six weeks after ordering:
"Your order has been shipped and is on its way. You won't receive a tracking number for another 2-3 weeks because we first ship in bulk to our domestic warehouse, then directly to you."
(This is brilliant because it seems plausible and it stretches out the delivery to just about 60 days.)

Four weeks later:
"We are still waiting for the tracking information from the carrier. Orders that has shipped in February were returned by Chinese customs and shipped again after that."

Two weeks later:
"Your order will need 4-8 business weeks to be delivered from the date it has originally shipped."

April 22, 2015:
"We just received the latest update that your order is one of those that were held by customs and after trying to ship your order a few times, we can no longer ship the item to you. A refund will be made on your account. This will take 1-2 weeks before it gets credited to your account."

At the end of April when following up on my refund:

"Its mainly because we have exhausted the refund limits of our processors for the month which will replenish this May. You can check with me around Thursday next week for the transaction number."

Follow up from this past Thursday, May 7, 2015:
"We sincerely apologize for the delay in refund. Its mainly because we have exhausted the refund limits of our processors for the month of April which will replenish this month. We are doing the refunds based on the the order ID. However, I have included your order ID to be refunded as soon as the processor limit is lifted. You can check with me around Thursday next week for the transaction number."

How Will it End? Perhaps it Already Has

It's certainly plausible that everything Wicked Lasers has told me is true, but I feel like I've been scammed. It's very frustrating to chase down companies who know about order hiccups, but don't tell the customer unless the customer follows up. If I have been swindled, then I have to admire their technique of stringing customers along past two months while being responsive to customer service queries. I really wanted to believe that my shipment was on its way. In the words of Alexander Pope, "Hope springs eternal."

were you ever able to get refunded? I'm still waiting on mine...

Were you ever able to get refunded? I'm still waiting on mine.

No. They haven't refunded me, so I had my credit card company run a charge back.