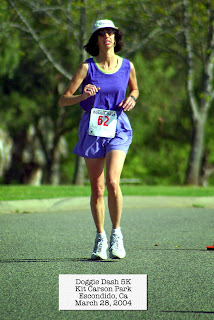 In the late 1990s I started going to races like 5Ks and marathons and taking photos of the runners as they crossed the finished line. Immediately after the race I'd set up my laptop with a dye-sublimation printer to sell the photos. When I told a friend what I was doing he described it as "instant gratification." Hence, that became the name of my company: The Instant Gratification Photo Company.  (IGPhotocompany.com and then, later, I shortened it to igphotos.com).

About a dozen years ago I started selling the photos on the web and I learned some valuable business lessons. I've already blogged about one important lesson on pricing.

Another interesting lesson was the experience of how the company name showed up on credit card statements. The full name of my company was simply too long to be displayed. So, a few weeks after a race I'd inevitably get a few phone calls from customers (usually a husband) asking, "What's this charge on my credit card from 'Instant Gratification?'" I'd get an immediate sigh of relief when I told them it was for their race photo.

This experience raised some interesting questions.
Did the name of the company ever cost me a sale? No.
Should I have shortened the company name to avoid these calls? Probably not since it just enhanced my brand at the cost of a few phone calls.

Anytime you can get your name in front of a customer is good for brand recognition, so don't forget about the credit card transaction.
Posted by Joe Moreno at 11:08 AM