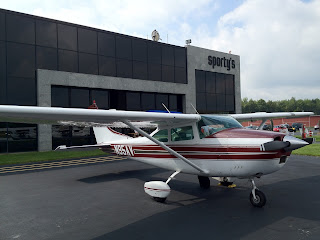 Over the past week, my wife and I have been visiting family and friends around the Midwest. A few days ago, when leaving Louisville for Cincinnati, one of the radios in our airplane stopped working.

Since it's a secondary radio, it wasn't a big deal, but I missed the convenience of using it for ground services such as getting the airport weather and talking to ground control.

When taxiing, I may have to use four different radio frequencies for receiving the weather and advisories, talking to the terminal (FBO) , picking up my flight clearance, and getting permission to taxi from ground control. Just before takeoff, I'll get takeoff clearance from the tower and then, shortly after takeoff, I'll have to flip over to air traffic control frequencies along my route. As I reach my destination, I'll need to receive the local airport weather and advisories and then, as soon as I taxi off the runway I have to immediately contact ground control.

My point is that there are a lot of different frequencies to manage. I've found it easiest to keep track of my frequencies by breaking them down into two distant categories: air and ground.


I keep the air frequencies on my top (primary) radio and my ground frequencies on my bottom (secondary) radio. The beauty of this system is that I can listen to two radios at once and, when someone is transmitting on the primary radio, it will block transmissions on the secondary radio.


With my secondary radio out of service it meant that I'd have to temporarily switch away from the ATC frequency to the ground frequency to hear the important advisories, which is a bit of an inconvenience.

Radio Repair
Since my secondary radio was out of service, and I was traveling on vacation in the Cincinnati area, I had to find a local avionics shop that could help me out. I received a great recommendation for Cincinnati Avionics at Clermont County Airprot (I69) which also happens to be the home of Sporty's Pilot Shop - the pilot shop of pilot shops. You'd be hard pressed to find any pilot in the U.S. who hasn't heard of Sporty's.


I made an appointment for Tuesday at 9 AM at Cincinnati Avionics and I arrived at my local airport, Butler County Airport (KHAO), with plenty of time. But, as I was preflighting my plane, a thunderstorm moved through so I had to sit it out in the plane for about 45 minutes until it passed.


Once the thunderstorm was out of the way, I took off for the 20 minute flight. Even though it was still raining, the flight was exceptionally smooth. As soon as I landed and taxied up to the avionics shop, the avionics tech that I'd been speaking to, Scott, came out to greet me just as I shut down the plane. Once Scott, who is also a former Marine, confirmed that my radio was properly seated in its chassis he pulled it out, took into his shop, and disassembled it on his bench.


He checked out a few things on the radio and confirmed that the problem was actually with the radio and not with the airplane's power. Then he said, "this is the moment of truth," as he checked the radio's internal fuse. If it was just an issue with the fuse, that would be a quick fix. Otherwise, it could possibly mean replacing the entire radio which runs $4,000 – $5,000 since this radio also used for navigation.


Luckily, once he replaced the fuse, everything worked fine. But, before he had time to repair it he told me that he had to run to a 9:30 AM meeting which would last about 20 minutes. He asked me if I'd like to visit Sporty's - which was a no brainier. So, he gave me the keys to their crew car and I drove over to the mecca of pilot's shops on the other side of the field. 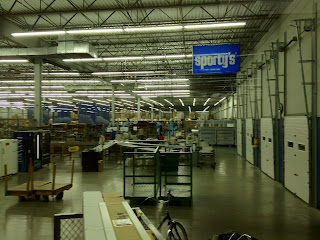 The retail portion of Sporty's pilot shop is only several hundred square feet. But the warehouse stocks virtually everything and it's "ginormous." They even have a dais so visitors can get a good view of the warehouse. In front of the store is their fleet of Cessnas for flight training with a large cafeteria on the second floor.


Stratus
After dodging thunderstorms while flying throughout the Midwest this past week I decided to get a Stratus which displays inflight weather directly on the iPad. The beauty of this device is that, unlike XM Aviation Weather, it doesn't require a subscription. The FAA broadcasts weather reports, at no charge, throughout the country, as part of its next generation flight tracking system, ADS-B.  As luck would have it, there's only one place that sells the Stratus: Sporty's. 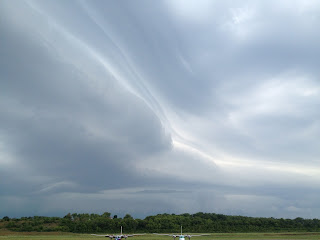 After purchasing my Stratus, I headed back to the avionics shop to settle up and saddle up for the flight back to Butler County Airport. I noticed several thunderstorms moving in the direction of Butler County, but I still had plenty of time - after all, it was only a 17 minute flight back.


When I got back to Butler County, I put my plane to bed and went into the terminal for about half an hour. While waiting for my ride, the staff at the terminal spilled outside to see a wicked cloud formation from the cold front that was moving in with the thunderstorm.


Only the edge of the thunderstorm hit the airport, but it was still not gentle. On the way home I noticed many downed tree branches. The Stratus will definitely pay dividends in weather like this.


In the end, it was a successful morning. Mission accomplished and it wasn't even noon, yet.
Posted by Joe Moreno at 2:00 PM