iCloud still has some critical bugs to work out. 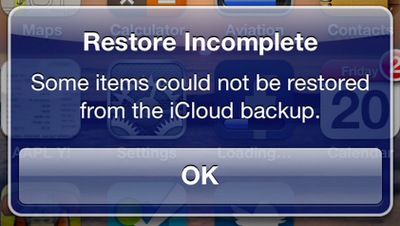 In my mind, I considered Apple's iCloud akin to Amazon S3 for the consumer. S3 allows users to upload files which are stored on Amazon's servers in three different places, for redundancy. While Amazon Web Services have had occasional down time, they've never lost S3 files that I'm aware of.
Last Tuesday, my iPhone started running hot and the battery was running down very quickly. After troubleshooting the problem, over two days, by switching between WiFi and 3G, without any luck, I decided to reset my iPhone to original factory settings and restore it from iCloud.
iCloud Benefits
Launched this past October, iCloud stores a backup of your media and data on Apple's servers instead of iTunes. The beauty is multifold – at least in theory.
First is that you don't lose your iPhone backup if your computer's hard drive dies.
Second, is that it's very efficient in that iCloud doesn't actually store your apps or music, in your backup, since Apple already has a copy of these files on their servers. In other words, they don't count music and app backup storage against your allotment of 5, 20, or 50 GB.
Third is the fact that iCloud allows you to share and sync media and files across all of your devices – which happens automatically, in the background. Change a playlist on your desktop and, within seconds, you'll see the updated playlist on your Apple TV or iPad. Buy a song on your iPad, and it's immediately downloaded to iTunes on your desktop or iPhone.
My favorite iCloud feature is Photo Stream. Snap a photo on your iPhone and it's copied to your iPad or iPhoto automatically.
Backup Regrets
Unfortunately, I didn't take all the necessary precautions before resetting my iPhone to factory defaults, resulting in the loss of my iPhone's camera roll containing more than 12,000 photos that I've take, over the years, on my iPhones.
I forgot the 3-2-1 rule of backups: Three backups, on two different media, with one stored off site. In my case, I only had one current backup stored off site, in iCloud, but I failed to make two other backups.
Don't Give Up The Ship
Of course, I didn't go down without a fight. Over the course of several days, I tried every combination of restoring my iPhone that I could think of.
Some of my iPhone restorations required 30 hour sessions of updating and redownloading content in vain, followed by three trips to the local Genius Bar at Apple.
Two days in a row, I left my iPhone at home when I went to work so it could continue downloading, without interruption, on my speedy 50+ Mbps Internet connection since I thought that the 30 hour wait was due to my 19 GB camera roll download.
But, in the end, the final option was to replace my iPhone with a new one, in case it was defective. But, still no luck.
Postmortem
I have 25 GBs of iCloud storage. My backups where a little shy of 25 GB, but there were multiple iPhone backups in iCloud. Surely I would have expected at least one of my iCloud backups to succeed. But, alas, no. 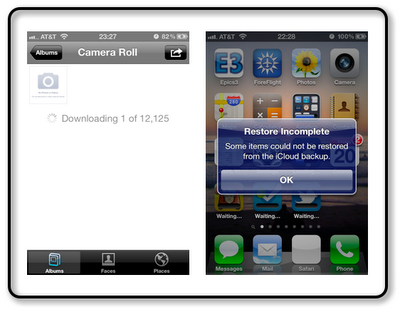 Restore Incomplete
iCloud thought that my 12,000 photos were on its servers, but it just couldn't seem to download them to my iPhone.
After completing each restoration attempt, iTunes also thought that my 19 GB worth of photos where on my iPhone. But, were they really? It seems not.

Needless to say, it was very disconcerting to see the Restore Incomplete alert: Some items could not be restored from the iCloud backup.
Cupertino, We Have a Problem
It appears that there's a bug with the iCloud restore process which causes internal, repeated crashes. As my iPhone tried to restore apps, a process would crash, before the app finished installing, resulting in a repeated download and installation attempt. I suspect that a big chunk of the thirty hours spent restoring my iPhone was due to it redownloading the same apps over and over again. The internal iPhone diagnostics and usage data shows scores of crash logs, each about minute or two apart.
Saving Grace
So, did I really lose my 12,000 photos? Not exactly. While I'm highly disappointed that I can no longer have them on my iPhone's camera roll, nearly all of them are in iPhoto, which backs up to my Time Capsule. My most recent photos that weren't in iPhoto were, luckily, on my Photo Stream, so I copied them into iPhoto.
As a side note, my Photo Stream doesn't seem to go all the way back to when I first started using it. There only seem to be a few hundred photos in my Photo Stream – it's suppose to keep the last 1,000. Hmm.
Still, it's highly disappointing that I couldn't simply recover everything from my iCloud backup. The Apple iCloud team has some work to do.
Posted by Joe Moreno at 3:53 PM

Those are the bugs that Apple has been seeking to resolve when the iCloud went operation. Happy to say that these bugs are done.
document storage