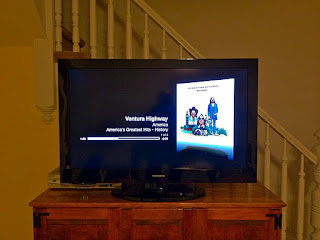 Apple launched iTunes Match, today. They were shooting for an October release, but they missed it by two weeks. I didn't really think about iTunes Match features until just now, when I tried it out.

I downloaded the iTunes 10.5.1 update and let iTunes Match run while I cooked dinner. It took about 45 minutes – I wasn't really paying attention. During that time, it scanned my iTunes library to determine which of the 2,400 songs it had on its servers. Then, iTunes Match took the songs that it didn't have on its servers and uploaded them. Fortunately, I have a blazing fast ISP, so uploading about 400 songs took less time than the entire iTunes music library scan.

I Get It
Once iTunes Match was done processing my library, I "tuned it in" on my Apple TV. I didn't really know what to expect, but there on my Apple TV were all my songs nicely arranged into my playlists.

I created a new iTunes playlist on my computer and copied some songs into it. In the time it took me to move my hands from my computer keyboard to the Apple TV remote, I noticed that the TV screen flickered and the new playlist that I just created showed up on my Apple TV. Ok, now I get it.

Prior to iTunes Match, it was a bit inconvenient to push my music from my iPhone or iPad to my Apple TV; and it was also a minor hassle to keep iTunes open on my laptop so that the Apple TV could "see" my music and playlists.

Missing In Action
Some songs, though, seem to be missing and I'm not sure why. I have some voice memos that I've recored which obviously shouldn't be uploaded, aka, "This item is not eligible for iCloud."

But, I also have some songs, such as a store bought Tchaikovsky CD that I imported into iTunes 10 years ago, that weren't uploaded. The song titles show up on the Apple TV, but they're grayed out. In iTunes, next to the track name, it displays an iCloud icon with an exclamation point indicating, "This item was not added to iCloud because an error occurred." The songs are on my computer, but it's not in iCloud. I'll have to investigate some more.

Update: A former coworker from Apple just read this blog post and tweeted me the solution to my problem: "Set view options to show iCloud status column. Sort by status. Select all 'Error'. Right click to reupload." Sure enough, that did it. I now see my missing songs in iCloud and on my Apple TV.

Piracy Big Brother?
So, does Apple and the RIAA now know which of their users have pirated songs? No, it's not that simple. Nearly all of my iTunes library is either composed of songs that I bought from the iTunes store or imported from my CD collection. In the case of CD imports, iTunes Match has no way to know if the CD import was from music that I owned or "borrowed" from a friend. Of course, Apple could listen to songs that are uploaded, which aren't recognized, and determine that, perhaps, they're a concert bootleg; but that would surprise me. It would be the equivalent of Gmail reading the e-mail on their servers to gather business intelligence.

Cloud Computing
"Cloud" has become the hot buzzword in tech since 2006 when Amazon launched their Elastic Compute Cloud (EC2) which allowed users to turn on a computer with the click of a mouse (ok, technically, they're not turning on a physical computer, rather, they're launching a virtual machine but it does the exact same thing as a computer and it's indistinguishable).

Amazon's EC2, along with a handful of competitors, are true cloud computing systems. Other systems, like iCloud or Amazon's Simple Storage Service (S3) are actually cloud storage systems - there's no real computing going on. But, that doesn't mean that they're not useful. On the contrary, they're tremendously useful.

So, what is the cloud? Simple: cloud, quite literally, means Internet, as in you're reaching out over the Internet for computing power or storage or fundamental web services such as DNS. And, you're reaching out via an API, which means that other computers can talk to and access these services without human intervention.

Abstraction: The Cloud For Consumers
Since modern computing first began during WW II, with the Mark I, layers of abstraction have been added, one on top of the other, in order to manage and reduce complexity. Each layer allows more "everyday" users to access computing power without requiring a detailed technical understanding.

Many times, when a new layer of abstraction is added, there's some resistance from hard core programmers since each layer removes some control that they once had. 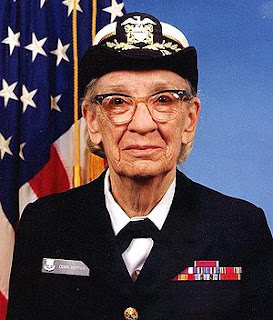 Rear Admiral Grace Hopper was one of the first programmers to encounter this resistance when she took her library of software routines and bundled them into the first compiler. The compiler ran slower and it was less efficient than writing pure machine code. Claims of code execution inefficiencies were a somewhat valid claim since computing power was not cheap 60 years ago. However, the true expense, since then, hasn't been CPU power, but, rather brain cycles. It's much better for a computer to step through some inefficient code than to have a human take a chance at creating bugs. As my former boss at Apple used to say, "Code you don't write is code you don't have to debug."

Rather then just create another cloud storage solution, Apple has completely removed the ambiguity of the file system just as it did with iTunes and iPhoto. When you import media into Apple's "iApps", you don't need to concern yourself with where, on the file system, the file actually resides. There's no need to know if your files are located under ~/ghopper/Music/iTunes... or c:\Program Files\... With iCloud, you don't have to know which folder your content is located in, iCloud handles that for you.

Hockey Stick Curve Jumping
There are incremental improvements and then there are revolutionary improvements. The latter are improvements that's aren't just twice as good, rather they're ten times better which usually involves a paradigm shift.

The ice trade is a perfect example of revolutionary technological improvements. In the late 1700s, only the rich had ice since it had to be harvested in the winter and then shipped like granite or marble and stored with a short shelf life. Frederic Tudor was Boston's "Ice King" and he made his fortune by harvesting and shipping ice to places that would not have otherwise had it such as the Caribbean and India.

Innovation during Ice 1.0 revolved around making sharper saws to cut the ice and inventing insulation, other than hay, to keep the ice from melting. But, if you worked in the ice business in the late 1800s, you needed to pay attention when refrigeration technology came along.

With the advent of electricity, ice harvesting was no longer necessary. In Ice 2.0, warehouses could make ice during the summer and send it out for local delivery. This is, in its truest sense, a curve jumping disruptive technology. If you were still sharpening your saw while ice was being made using refrigeration then you would have missed the boat.

Looking back, it isn't hard to realize that Ice 3.0 was the invention of the personal ice maker, aka, our home refrigerator. If warehouse refrigeration companies didn't start making home refrigerators in the first half of the 20th Century then they were probably left behind.

Technology & Innovation
So, how in the world does the ice trade tie in with Apple? Both involved clear, revolutionary, jumps in technologies, i.e. a 10x improvement over the previous way of doing business. Instead of harvesting ice, we make it at home. Instead of entering cryptic commands into a text editor, we use a mouse to drag and drop icons.

After all, what is technology? The answer is relative. Do we think of the wheel as technology? You could say that technology is anything that was invented after you were born. You can think of it as a synonym for magic and, nowadays, when it breaks, you have to throw it away and get a new one because it can't be fixed. (I'm paraphrasing Strong Bad.) As Grace Hopper once said, "Life was simple before World War II. After that, we had systems."

Think Apple
At Apple, we philosophically thought of innovation as the intersection of imagination and reality. But, more pragmatically, we believed that innovation was anything new that reduced the cost of a transaction, either in terms of time or money.
Posted by Joe Moreno at 6:16 PM