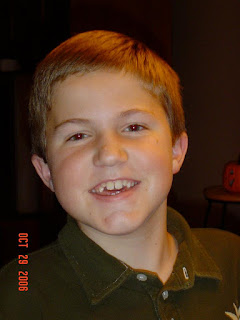 Brady Sherman's one of Jerry's Kids, he was born with Duchenne Muscular Dystrophy. He's an exceptionally bright kid who loves all things mechanical and military, especially aviation.
I've known Brady since before he was born. His mother is my wife's best friend and college roommate.
Brady was diagnosed with DMD when he was a toddler so we all had an inkling for his life ahead which averages late teens to early 20s.
Personal Memories
One Christmas, when Brady was about five or six, he got his first two-wheeler bicycle. We worried that he might hurt himself. When Brady was ridding his new bike he, like all kids learning to ride, fell over. As the bicycle rested on top him, he made it very clear that he was uninjured. With his arms outstretched, lying face down, he professed, "I'm O-K!" We got a good laugh out of the fact that he issued this decleration with the force and effect of MacArthur's, "I shall return." 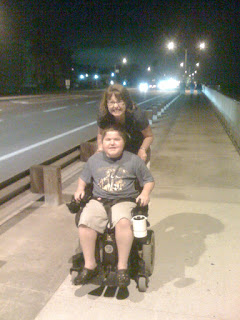 We took Brady for a flight in my plane this past summer. Since he's been in a wheelchair for the past few years, it took two attempts to get him into my Cessna. The first attempt was with his mother and I trying to lift him into the front copilot seat. Brady was a little anxious about the thought of being lifted into the plane so we tried again, about a week later, with his father and me.
When you have no use of your legs and suffer from muscle degeneration, falling is a big deal. A very big deal.

Fortunately, his dad and I were able to lift him into the plane and we went up for a flight. He got a thrill out of flying the plane when I let him take the controls. But, he only flew the plane for a few minutes. Like most people who take the controls for the first time, including me, we don't really know what to do and a short time is more than enough. 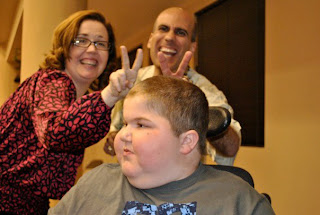 Joking Around
Brady loved a good joke, even when the joke was on him. Several years ago, my wife, Laura, and I were over the Sherman's house for a Christmas Eve party. The party was still going strong well past 11 p.m. Brady was getting very upset as he kept trying to end the party and throw everyone out. As we all know, Santa Claus will skip your house unless everyone's asleep. Years later, I still teased him about that and he always smiled and chuckled. 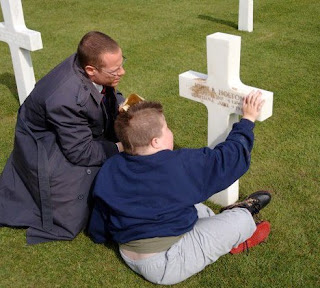 I taught Brady how to stick one finger in your nose while licking the other finger and then touch the licked finger to someone's face. "Watch how wigged out they'll get," I told him. We all got a big kick out of it when it tried it on his dad a few minutes later. (Well, maybe all of us except dad.)

Wishes Granted
Brady's wish was granted a couple years ago by the Make-A-Wish Foundation when he and his parents were flown to Normandy, France for a battle field tour. That's a memory to last a lifetime.

My first paid journalism article was about Brady and the training he and his family went through when they got their yellow lab companion dog. I was amazed at how well trained that dog was and how much assistance he gave to Brady.

This Morning
Yesterday, Brady fell as he was being lifted out of his wheelchair and broke his leg. He was treated and he went home with his parents. His dad slept next to him last night. This morning, Brady's breathing was very shallow and his parents couldn't wake him. Laura called me at work and told me that Brady was dying as he was being rushed to the hospital while CPR was being performed in the ambulance.

The doctors were unable to to resuscitate him.

Brady passed away this morning aged 14 and a freshman in high school.

We all thought that this moment was still years away. None of us can process this. It just doesn't seem real. He was just a kid.

While I, like most everyone, worked hard to get where I am; I too often forget that I did nothing to be born. I didn't earn being born – it quite literally befell me.

I need to be reminded that I won the birth lottery on many different levels... where and when I was born, my good health, and so on. Steve aptly described it: Life is fragile. 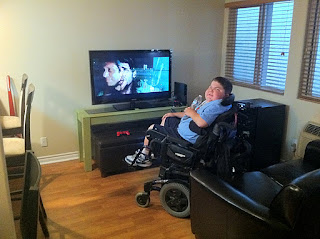 Last Shots
I clearly remember the last time I saw Brady. It was Saturday, September 3, when I snapped this photo of him watching Black Hawk Down. Brady loved the military and he knew more about it than any other kid I know.
Raw Emotions
Tragedies like this leave emotions very raw as waves of grief come and go, followed by anger and then laughter at fond memories.

Brady's mother best expressed one of these extremes, tonight, on Facebook, "Fuck you Duchenne Muscular Dystrophy."

Brady's final life experience was in his own bed, in his own home, under the same roof with two parents that loved him with every fiber of their existence.

But, as comforting as that sounds, at this point, I can't cry hard enough.
Posted by Joe Moreno at 7:27 PM