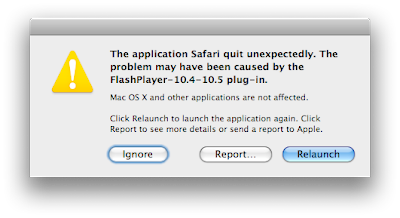 Flash is great in that it is ubiquitous. There is not a single, decent, desktop web browser that doesn't have Flash installed.

But, the problem is that Flash is a CPU/memory hog.

The Java VM, which runs applets inside web browsers is also a hog, but few websites that run Java applets will run more than a single instance. Flash, on the other hand, is everywhere.

Nearly every single ad on a professional website is Flash so there are multiple instances of the Flash plug-in running on a single page and they're all sucking up CPU cycles to process video which can result in your web browser crashing. This can render a web page painful to load and watch on a web browser that's more than a few years old.

Flash was originally designed to provide an interactive user experience, similar to Java, and it later became the de facto standard for displaying video. Unfortunately, it can only display video, effectively, on the newest of desktop web browsers.
Posted by Joe Moreno at 12:52 PM