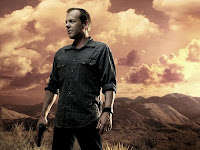 All at once the series finales are going... going... gone. Say good-bye to Lost and 24. Will America be safe without Jack Bauer?

How dangerous are the streets of New York City since Law and Order is going off the air, too? It seems that there's a L&O episode airing on TV, continuously, between 6 am and midnight every day. I'm sure they'd like to keep running episodes into the wee hours of the morning, but we have to make room for get-rich-quick and fad diet informercials.

Speaking of informercials; of the all the stations we have through our Time Warner cable subscription between channels 2 and 72, more and more are now off the air. It looks like these stations now broadcast in the triple digits which our old TVs don't receive. I recently counted 13 informercials, all running at the same time, on different channels, throughout the 59 channels that were broadcasting at 5 am. That is ridiculous.

Thank God for Hulu, ABC.com, and Netflix on my iPad. I suspect that watching TV, in the not-so-distant future, will be more common on tablet size devices. A 10" screen, viewed at 18", appears bigger than a large flat panel TV on the other side of the room. Today, homes no longer have party (telephone) lines and, soon, bedrooms may no longer haver "party" (shared) TVs.
Posted by Joe Moreno at 10:10 PM