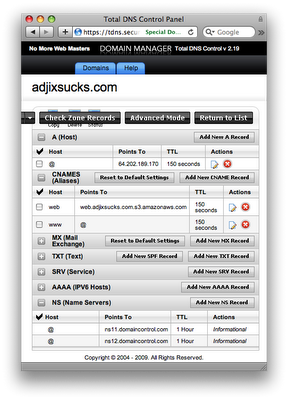 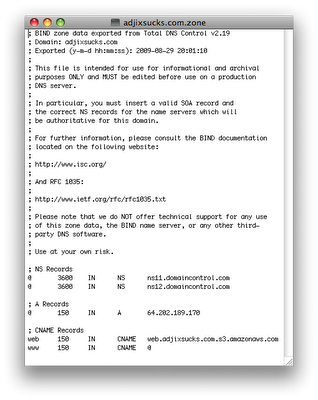 Out Source or In-house?
While there are other DNS hosting options, and some cost a small amount of money, it makes a lot of sense to use a professional DNS hosting solution instead of running your own DNS server. If you don't own the hardware then you don't have to support it. (While software may have bugs, it never fails in the manner that hardware can.) Due to the critical nature of DNS, third party hosting solutions do an excellent job at supporting this service.
Posted by Joe Moreno at 6:35 PM

Hello !.
You re, I guess , perhaps very interested to know how one can collect a huge starting capital .
There is no initial capital needed You may begin to get income with as small sum of money as 20-100 dollars.

AimTrust is what you need
The company represents an offshore structure with advanced asset management technologies in production and delivery of pipes for oil and gas.

Its head office is in Panama with structures around the world.
Do you want to become an affluent person?
That`s your chance That`s what you desire!

I feel good, I began to take up real money with the help of this company,
and I invite you to do the same. It`s all about how to choose a proper partner who uses your savings in a right way - that`s the AimTrust!.
I make 2G daily, and my first deposit was 1 grand only!
It`s easy to start , just click this link http://igazodiq.exactpages.com/vowylym.html
and lucky you`re! Let`s take our chance together to get rid of nastiness of the life

Thanks.. that info was spot on for what I was seeking. I am hosting my own site currently under construction (my first), and have a static IP. I was aware of DynDNS, but figured there were more players out there than just them and UltraDNS (which seems costly). I actually registered my domain with GoDaddy, but I didn't see this service advertised (or if it was, I must have assumed it was both Web and DNS). Anyway, thanks again. Think I will go check out this service at GoDaddy.

Hello!
You may probably be very curious to know how one can manage to receive high yields on investments.
There is no initial capital needed.
You may begin earning with a money that usually is spent
on daily food, that's 20-100 dollars.
I have been participating in one company's work for several years,
and I'll be glad to let you know my secrets at my blog.

Please visit blog and send me private message to get the info.

i very much love your own posting way, very remarkable,
don't give up and also keep posting since it just simply very well worth to read it,
impatient to browse through more and more of your current well written articles, goodbye!

Good dispatch and this mail helped me alot in my college assignement. Gratefulness you for your information.