Save the Seals
Seals at the historic kiddy pool in La Jolla were kicked off the beach, again, and then their eviction was stayed, again. Lather, rinse, repeat. Should they stay or should they go? 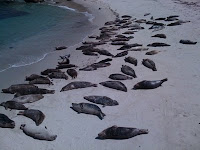 As a matter of fact, nearly all Twitterers aren't happy that the seals are being kicked out. Some are "up in arms" and ready to protest:
buffynerdgirl: I am fully prepared to stand arm in arm with my fellow San Diegans in protest of the forcing out of the La Jolla seals. People suck.

It was hard to find anyone in favor of removing the seals. Who would want these cute little guys to be kicked to the curb? For starters, swimmers and triathletes who train there are not particularly fond of their presence since the seals bring sharks, looking for a snack, closer to shore.

But, if you "listen" closely enough, you'll find some people willing to speak their mind in favor of removing the seals. John Kelly, from San Francisco, tells San Diegian Rachel Kaplan a few of his reasons:
JohnHedge: @Rachieheather IMO [in my opinion] the seals should be removed. They are a health hazard and their fanatic supporters take things too far. Try diving there.

JohnHedge: @Rachieheather My problem with the seals is that Children's Pool is a manmade public beach and they are polluting it. It is not a sanctuary.

The decision hasn't been finalized - meanwhile, the seals continue soaking up the Southern California sun oblivious to the legal battle surrounding them.
Posted by Joe Moreno at 9:06 PM