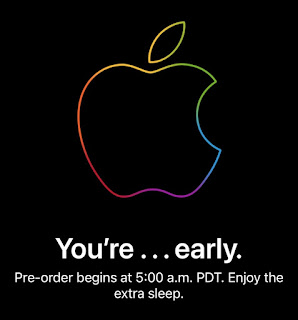 It has been many years since I ordered a new Apple product on launch day. My old iPhone was long in the tooth and the camera on the iPhone 13 Pro is a perfect reason to upgrade. So, I pre-ordered my iPhone, yesterday, and then set this morning's alarm for 4:40 AM PDT.

Yesterday's pre pre-ordering yielded nothing since it couldn't be found, this morning. So, I went ahead and started an entirely new order.

There were plenty of reports from people who couldn't use their Apple Card to make the purchase. Although this wasn't as bad as the iPhone 4 launch disaster, it was still a significant cause of concern since the Apple Card will give you back 3% as cash when you use it for online Apple orders.

After my order was placed with a confirmed delivery date of next Friday, I made multiple attempts to change my credit card payment from my debit card to my Apple Card. That was not a fun experience.

The first CSR I spoke to was amazingly helpful, but she just didn't have the capability, in her system, to make the adjustment for me. She recommended calling back later when my order had moved to the next step, after processing the initial authorization.

About an hour later, I called back. The CSR I spoke to told me that changing payment options wasn't possible. She said that I'd have to cancel my order and reorder the new iPhone 13. That was obviously not an option because I wasn't willing to wait an additional three weeks due the delay from all the orders that had stacked up since the time I had originally placed my order.

Then I tried something that has always worked for me: tweeting to @AppleSupport. Unfortunately, this was the one time they couldn't help me.

Next, I texted Apple via Messages. They recommended that I call Customer Service specialist at 1-800-676-2775. That did the trick. I could immediately tell that the CSR I was speaking with was highly energized and engaged in solving my problem which only took about five minutes. Persistence pays off.