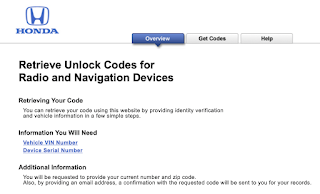 If you need to find the PINs to unlock your Honda's radio or navigation system, then visit radio-navicode.honda.com to retrieve the PINs. But, you'll need your VIN and the devices' serial numbers, first.

Yesterday, I took my Honda Accord in for servicing at a local repair shop. A few hours later, the owner of the shop called me to tell me that my car was ready to go, with a new battery.

When I started my car, I noticed that the car's dashboard touch screen was asking for a PIN since the power had been removed. I found a piece of paper, in my glove compartment, with a four digit PIN that I tried a few times until I was locked out of the system.

I took the car to a local Honda dealer where a customer service rep explained the differences between a radio unlock PIN and a navigation PIN. Basically, the radio PIN is entered using the knob that tunes in radio stations and the navigation PIN is entered through the dashboard touch screen.

The key lesson I learned was, obviously, to keep my PINs and serial numbers handy. If Honda didn't have them on record, I'm not sure what I would have done.